I’ve done plenty of tough things in my life and being a Dad is definitely the hardest; the job description changes almost daily.  As both parents and children grow and evolve so do the challenges of parenting.   Yet I’ve known folks that have made it look easy and Melet Antonakos was one of those guys.  Melet was easy going, always smiling and whenever one talked to him he treated you like you were the most important person in his life.  He gave you his attention, gripped your hand mightily, patted you on the back, and never missed an opportunity to smile.  I never caught Melet disciplining, correcting or counseling his children yet he and his wife Kim raised three great kids.  Olivia, Mills and Ana were kind, diligent, athletic, smart, polite and reverent.  They weren’t coerced into good behavior, they just lived it.  I often looked at Melet’s kids and wondered what he was feeding them; what was he doing that I wasn’t because he made it look so easy.  Some kids behave a certain way out of fear while others are constantly testing their limits.  I’ve heard kids say something to the effect of “if I don’t do this then Mom and Dad will hear about it and I’ll get in trouble.”  Well that may be accurate but if I’ve been an effective father, my kids will do what’s right because they want to and not out of fear.

My son said it best.  “I never heard Olivia say one mean thing, ever.”  In this day and age of a 24/7 media bombarding our children with repugnant stereotypes and glorifying the concept of foolish, bumbling parents how is it possible to raise kids that were as grounded as Melet and Kim’s?  Amy and I have two great teenagers yet we’ve done this by the skin of our teeth; we’ve lost sleep, prayed, struggled, worried, fretted and coerced them into responsible teenagers while Melet and Kim made it look so easy.  And now they’re all gone.

Many of my friends have struggled with “why?”  It’s in our nature to look for an answer, a sense of understanding as we come to terms with such a monumental tragedy and as Christians there’s always that element of “God’s plan.”  Well forgive me but I can’t buy that.  I can’t see our creator planning so much heartbreak as this. And I’m struggling with images of a faltering engine, the unmistakable shudder of a wing as it loses lift, Melet reaching out for his kids and the ground rushing up to meet them.  And I see not the hand of God but rather a technical issue with a turbine engine at the worst possible moment, on takeoff.  When airplanes encounter problems; altitude and airspeed can give a pilot options.  Airplanes are most vulnerable at takeoff and landing, when airspeed is just above the minimum needed to fly and even a small problem can leave a pilot with little recourse. Was it contaminated fuel, a broken fuel line or a failed bearing?  In time the NTSB will find out and issue a directive which may prevent a future crash.

Yet that will be little comfort for the friends and family left hurting by the loss of these two families and the wife and children of the pilot, Walter Rediske.  Our community is in shock yet in death Melet has once again set an example for parents everywhere.  We’re hurting because Melet and Kim as well as the McManus’s, were such good people.  They were actively involved in many aspects of our community; made friends easily and led by example.  Yes, Melet was successful but you wouldn’t have been able to tell when you met him.  They didn’t live extravagantly and he never bragged about anything.  I occasionally kidded Melet (who was just a few years older than me) by telling him that “I want to be just like you when I grow up.”

Not that long ago I had a brush with death that earned me four days in ICU.  When I left, I made amends with God and have tried my best to be a better person, better father and a better husband yet I haven’t even come close to the example that Melet Antonakos set and to make matters worse, he never divulged his secrets of being a great father.  He claimed it was a daily struggle that kept him up at night, that he and Kim worried, struggled and fretted and that the stress of parenting was so great that he’d pulled all his hair out.  Yet he made it all look so easy.

There are no guarantees in this life.  Tomorrow is a whispered promise as fragile as a dandelion blossom in a summer’s breeze.  When our time comes, we will be measured not by our conquests, bank accounts or possessions but rather by our friends, our relationships and our children.  And when we depart this earth, whether in a timely fashion or through an unexpected tragedy, it would be the greatest testament to our lives that an entire community would be in anguish.

Melet, I still want to be like you when I grow up. 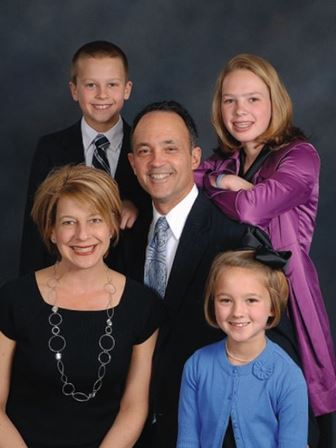 Melet and Kim with Mills, Olivia (in purple) and Ana