Want to compete in a big time BBQ contest?  $275.00 is all it takes to enter the NC BBQ Championships and that gets you a 25 by 30 foot piece of grass with water and electricity.  The only thing left to pay for is meat, fire, spice and beer.    A few days prior to Father’s Day weekend, a friend of mine (RT) asked me if I’d ever been to the Blue Ridge BBQ Festival in Tryon.  It had been a couple of years and I was available so I took him up on it.  I secured some media passes and away we went.  On a warm, sunny Saturday we pulled into the parking lot and were greeted with enticing aromas of smoldering hickory, warm pork fat and toasted spices.  At a BBQ competition there’s two really festivals; one geared towards the attendees and one for the competitors.  The average visitor usually won’t go near the competition area, it’s just too intimidating.  There’s a lot of stress, sweat, hot steel and secrets among the competitors and such a stroll through so much professional talent can be imposing for a typical backyard griller.  Yet if one takes the time to chat, most of the pros are engaging, friendly and hospitable.  You know–Southerners.  And some of them have come to Tryon on an enormous budget while others have made due on a thrift store’s dime.

When RT and I walk into the competition area the first thing we both notice is a Peterbilt Cab with a custom made trailer parked next to a beautifully renovated mid-1980’s MCI bus next to a Prevost luxury RV; it was easily a million dollars plus worth of transportation.  Chariots for the Goliath’s of competitive BBQ. 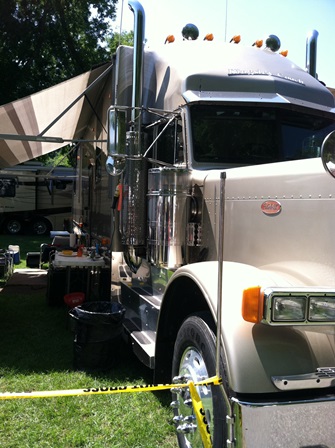 The rolling home of John & Kathy Swift and their Bassett Hound Roxie.

Yet twenty feet away Trey Hatfield and his team from Spartanburg’s Dudley’s restaurant have made due with a Coleman tent, a few cases of beer and a cooker pulled by a late model Chevy truck. 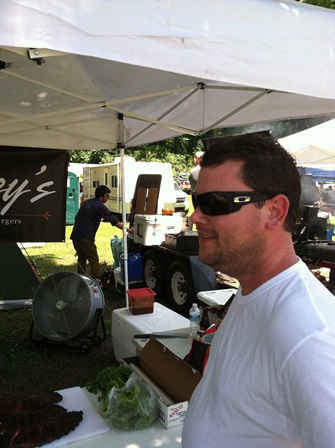 And his chicken is wonderful; brined in a combination of beer, orange juice, herbs, salt and sugar.  Slow cooked over hickory with a pecan finish, then brushed with a slightly sweet, well-balanced glaze; it’s as memorable as any bite of chicken I have ever had.  Trey is one of the few using breast for his chicken dish, the other chicken dishes I saw were all thigh.  With its high fat content, thigh meat is more forgiving and Trey knows he’s taking a chance with breast.  He shrugs his shoulders and grins, “I’m taking a shot, hopefully the judges will agree.”  When I asked him if he was intimidated by the exotic wheels, he shrugged it off.  “It’s all gonna come down to taste and that’s something you can’t buy.”  Just behind Trey are three gentlemen that could pass for extras from Duck Dynasty, their beards were that memorable. Check out that custom paint job on their 25+ year old camper. John Childers and his team are well known for feeding their local Army National Guard outfit when they returned from the Middle East.

John Childers (Pigs in Heat, Toccoa, GA) a 10-year veteran of this festival offers us a couple of icy cold beers and a plate of sweet, smoky and lightly spiced pork ribs.  John built his own smoker and it’s a brilliant design that fits neatly onto its own trailer. 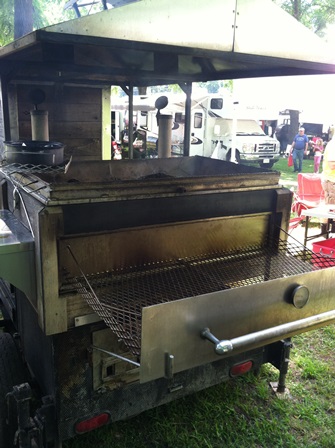 When I asked him if his team was intimidated by some of the better financed teams they all laughed.  “Hell we spent more on beer than we did on supplies!”  Three guys cooking great BBQ using time-honored traditions and having a great time, their story is similar to most of the competitors.  Yet some of these guys have winning in their veins, they’re tough competitors and they tailor their product to their audience.  Walt Moulton (Rocky Top BBQ, Jonesborough, TN) is one of those guys.  A farmer and cattle rancher by trade; he’s also the owner of that MCI bus. Walt favors a Tennessee orange Jambo cooker that RT quickly points out is the wrong color; RT prefers Clemson orange.  Walt is making only his 2nd visit to this event and after talking college football, he tells us he’d be “happy to finish in the top 15.”  His ribs are very good, a bit on the soft side yet redolent with smoke and spice though I found them a bit sweet; the sticky glaze had caramel notes with a touch of apple vinegar.  “I’ve got a couple of different sauces I use; I tailor my product for my audience and in this area I like to use a sweeter sauce.”  Walt likes riding in style.  He’s worked hard to get to the point that he could splurge on his ride and besides, as his lovely wife Rebekah begrudgingly explains, “most normal folks have a house, we live in a bus.”  Walt’s having as much fun as anyone else here, he just happens to have the coolest ride.

Bill Sack (Fire-n-Smoke, Rosman, NC) has also tailored his sauce for this region.  His chicken thigh is extraordinary and when RT and I bite through, the skin stays in place and doesn’t slide off like hot cheese on a cheap slice of pizza.  Bill notices me pondering the skin. “There’s a trick to that.”  His eyes twinkle yet his tone of voice says “And I’m not telling you.”  Bill’s been a judge for several years and competing for three and he prefers competing.  “It’s a heck of a lot more fun.”  Bill’s one of the guys on a budget, he’s come here with the essentials yet he also understands what it takes to win.  As he delicately brushes on the final glaze to his chicken thighs he nods disapproval to the Goliath’s.    “Big screen TV’s, air conditioned motor homes, it doesn’t take all that to win.  It takes great BBQ, plain and simple but you gotta know your judges.  What I like has nothing to do with it; it’s what the judges like.  I use different techniques and sauces depending on the region I’m competing in.  If I’m in southern Georgia I’ll take peach and pecan wood, I’ll use that to finish my ribs with, up here maybe just hickory.  It’s so competitive, just last week I missed out on second place by two one-thousandths of a point.” 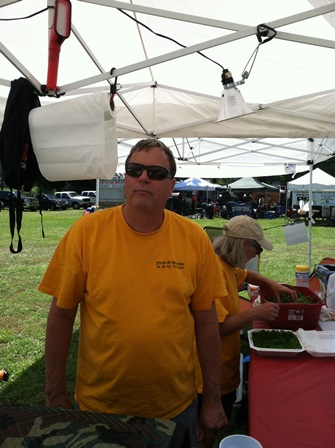 Bill and his wife prepare to plate up their chicken

Dave and Celeste Mauro (The Blue Bloods, Hammond, LA) have come here to win.  Yet his brisket hasn’t cooperated and he doesn’t know what he did wrong.  “It’s not worth a damn, it’s just mush.”  RT and I find it delicious but with so many great teams and a point scale that starts at 180.0000, the spread between first and tenth can be very thin indeed.  While chatting with Celeste we meet Trudy and Tom O’Hara from Ontario.  Did I hear that correct, Ontario Canada? 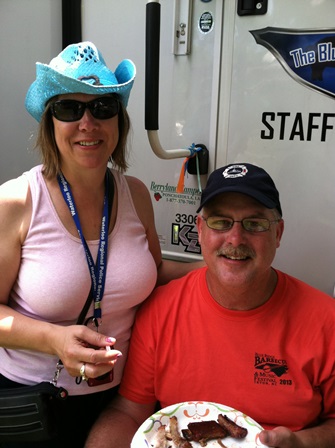 For a wedding present, Tom bought Trudy a motorcycle.

Tom puts his ribs down long enough to point out they live in southern Ontario.  Of course!  Tom and Dave are both cops on summer vacation and they’re enjoying each other’s company.  Tom props up his new friend by swearing he’s eating first place ribs yet Dave is completely dejected over his brisket.  As it turns out, Dave’s ribs would come in 2nd, vaulting him to a 6th place overall.  Not a bad showing in a field of 92 teams.   Dave’s budget probably fits in the middle, between Goliath and David.  He has a nice camper and shiny powder coated cooker with his team colors. Dave understands that the judges won’t see anything other than his BBQ.  It comes down to sweat, hard work and careful attention to a sense of place.  Everyone puts their BBQ in the same brown box, carries it to the judge’s tent and from there the box goes to a table of six judges who won’t know how much money a team did or didn’t spend this weekend.  And when the scoring is done and the Grand Champion is announced, it just so happens that the winners drove to North Carolina in their own restored MCI bus; Rebekah and Walt Moulton. 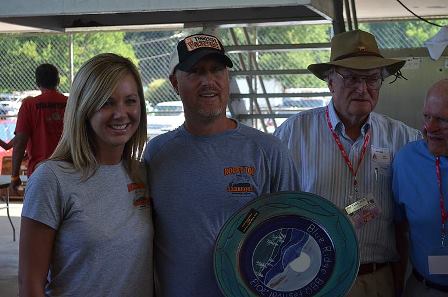