Finally the rain had abated.  The last four or five Saturday mornings have been awash in combinations of rain, lightning, wind and thunder.  However, this past weekend the biggest meteorological threat was sunburn.  We all slept in to what I consider late, 7:30 for the adults, 9:00 for the teenagers.  After sharing coffee and conversation for an hour, Amy and I decided to treat the kids to breakfast.  Due to my son’s ability to devour a forty five hundred calorie meal in four and a half minutes, I have to consider the financial implications of taking the family out to eat.  He had a football game the night prior and his metabolism would likely be in overdrive and a 9:00 a.m. Saturday wake-up call would mean he would enter the day with only ten hours of sleep instead of his usual twelve.  Risky business indeed.  We convinced both son and daughter to join us for breakfast at Whole Foods.  If you’re going to deny teenagers two hours of sleep, you’d better have a good reason.  Pancakes, turkey sausage and breakfast pizza made a good case. 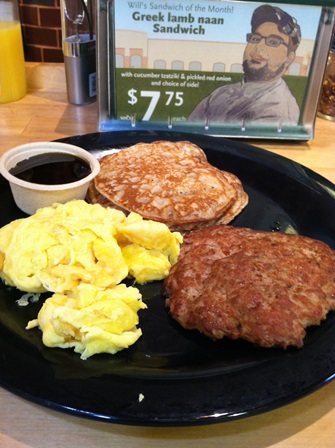 Maybe I’ll come back for that Greek Sandwich

Our next stop was Christ Church to drop off the girls.  My daughter had volunteered to share her make-up application skills to the cast of the Prodigal Clown, a musical based on the parable of the Prodigal Son, found in Luke’s gospel.  The cast, me included, would begin arriving at 2:00 pm for the 4:00 pm dress rehearsal and there was a lot of makeup to organize.  My son and I headed to the office supply store to finish his back to school shopping.  While I was testing out new office chairs, I recognized one of my sixth grade basketball players, now two days from starting high school.  She beamed when she recognized me and blurted out “Coach Malik!”  While her father and I caught up, my son made an occasional appearance to drop supplies in our basket.  When Olivia came to her first team practice she had never handled a basketball.  Four games in, she scored after being found wide open by one of our forwards.  Olivia was so petite she had to use every bit of her body to get the ball into the air.  And when that ball snapped the net, everyone on the team cheered.

“Tudor, do you remember Olivia?”

Olivia clearly remembered him.  At five eleven and 195 pounds, he towers over her.  Her eyes lit up as he smiles and mumbles “sure.”

“Y’all will be in the same school this year so don’t let anyone pick on Olivia, got it?”

And that was enough for Olivia’s heart to skip a beat.  We have the conversation often and I can see it’s time for a reminder.  Honor is something not easily earned yet quickly lost.  Olivia’s dad and I both exhale.  After my son drove me home I headed back to church.  I donned my sequined, evening length tuxedo, and sat down in front of my daughter. She gently applied a light base, followed by mascara and rouge before darkening my eyebrows.

“Can I do this tomorrow too, Daddy?”

“Of course you can sweetheart.” 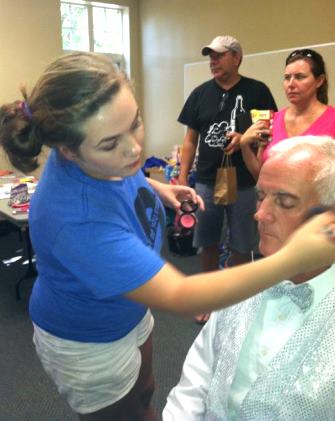 The following Sunday afternoon at about 5:40 pm, I stood in the shadow of a giant cross.  As I stepped up to that microphone I could feel the warmth of 45 smiling kids, all decked out in circus attire.  I drew a deep breath and felt what little was left of the blood clots that had sent me to the emergency room only seven days prior.  While in the hospital I had gasped to the doctor, “I just want to make it to the play on Sunday.”

What had felt close to a knife wound now merely stung like a toothpick poking me in my right lung.  A weekend that started with pancakes and sunshine was about to finish with mascara, sequins and a few unsteady notes that just might send shivers down the audience’s spine.  And with all those kids protecting my flank and 400 people in the audience, I opened my mouth and sang. 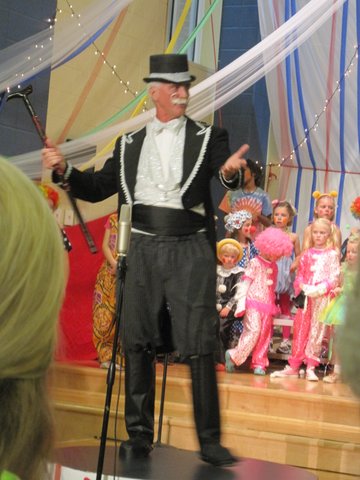 Celebrating another close call with 45 kids and a bedazzled tuxedo