We have a walking/cycling trail in our neighborhood and in the middle of this trail is a healthy growth of wild Bamboo.  Bamboo reproduces by sending out shoots from a network of rhizomes that grow rapidly in the spring.  I checked on the bamboo last week and didn’t see any shoots then we went away for 4 days.  Today I went for a ride and sure enough, the bamboo shoots were plentiful. 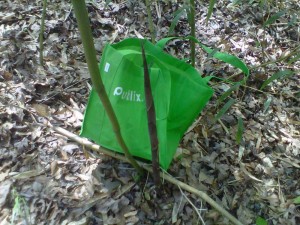 This shoot is a few days past its prime.  You really want to harvest when they are half this size. 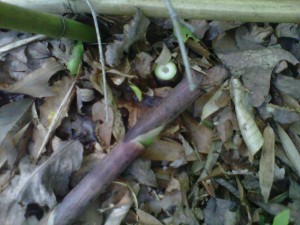 I harvested about 20 shoots and brought them into work.  The shoots have to be trimmed of the tough, outer leaves. 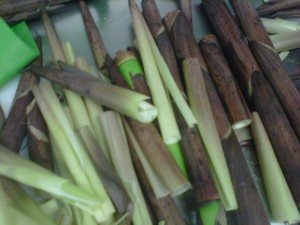 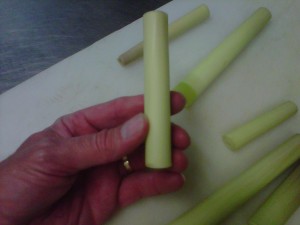 Now slice this into thin strips (julienne) or rings.  Then blanch in boiling salted water for a couple of minutes.  Now you can saute or throw into a stir fry.  Fresh bamboo has a pleasant, almost briny flavor.  Bamboo is a grass and eaten raw it does have a slightly grassy note to it but after blanching the flavors soften.  For dinner service we served with soft-shell crabs.  We had some farm fresh romaine lettuce that we brushed with an herb olive oil and grilled.  Then I simmered some local asparagus with the chopped bamboo, a bit of asparagus stock, some leeks, salt and pepper and finished with some morel mushroom butter and that was drizzled over the romaine lettuce.  I added a few stalks of asparagus, then placed a fried soft shell crab over that and garnished with some more asparagus and a lemon aioli. 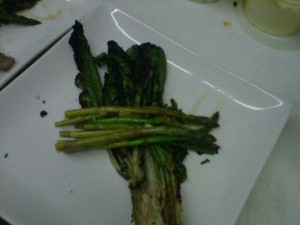 Then a soft shell crab appeared! 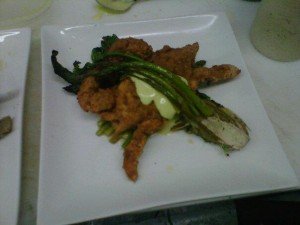