Saturday afternoon we got a phone call from a gentleman that hunts mushrooms.  He found a patch of yellow morels and he wanted to know if we would buy some.  Jason, the Chef/Owner of Stella’s Bistro responded emphatically, “Damn right!”  As he got off the phone he turned to me and relayed the good news and asked if I would create a dinner special.  I’m certain that my eyes were twinkling.  Since we had just gotten a delivery of beautiful Yellow fin tuna I suggested we do something with that.  After a brief discussion we settled on Seared Tuna served over some local asparagus (also the first of the season) with a red wine and veal stock based sauce, a Parmesan souffle and some roasted local cauliflower.  Our cauliflower came from a farm in Manning, about an hour south of us and the asparagus was coming from Chris Sermon’s farm, Bioway.  Our morels showed up about three p.m. and they were beautiful: 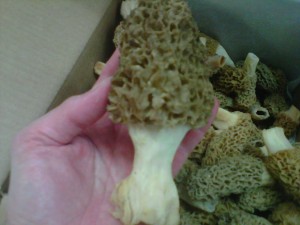 Mushrooms like these are very expensive, so we needed a dish that we could price appropriately.  Tuna is a natural foil to the meaty earthiness of morels, and we coerced more meatiness out of the fish by serving it with a sauce made from veal stock, not seafood.  I chopped up some shallot, garlic and carrots, sauteed that until the vegetables had browned sufficiently then added a cup of merlot, reduced that until it was almost dry (au sec) then added about a half cup of heavy cream and again reduced until that was au sec.  Then I added about  three cups of fairly rich veal stock.  I cleaned then poached the mushrooms in butter then added some chicken stock to this, carefully lifted the mushrooms out of the stock and set them aside. Then I carefully strained the butter/chicken stock liquid to remove any sand and added that to my simmering sauce.  I then added some thyme and parsley stems then let it simmer for about thirty minutes. I tasted the sauce, adjusted the salt and pepper, strained it twice then placed it in my steam well.  For service I cooked the tuna (au poivre style with lots of cracked black pepper) to order, while James the hot appetizer cook, baked the souffle.  The asparagus was roasted in butter, then I placed the tuna atop the asparagus, topped with some of the cooked mushrooms then ladled the sauce over it.  The cauliflower was placed on top of the souffle then the dish was ready to be served. 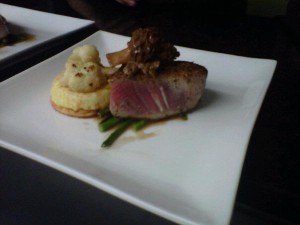 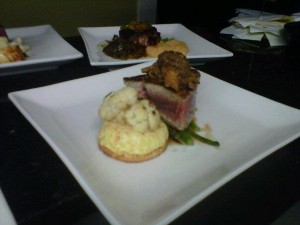