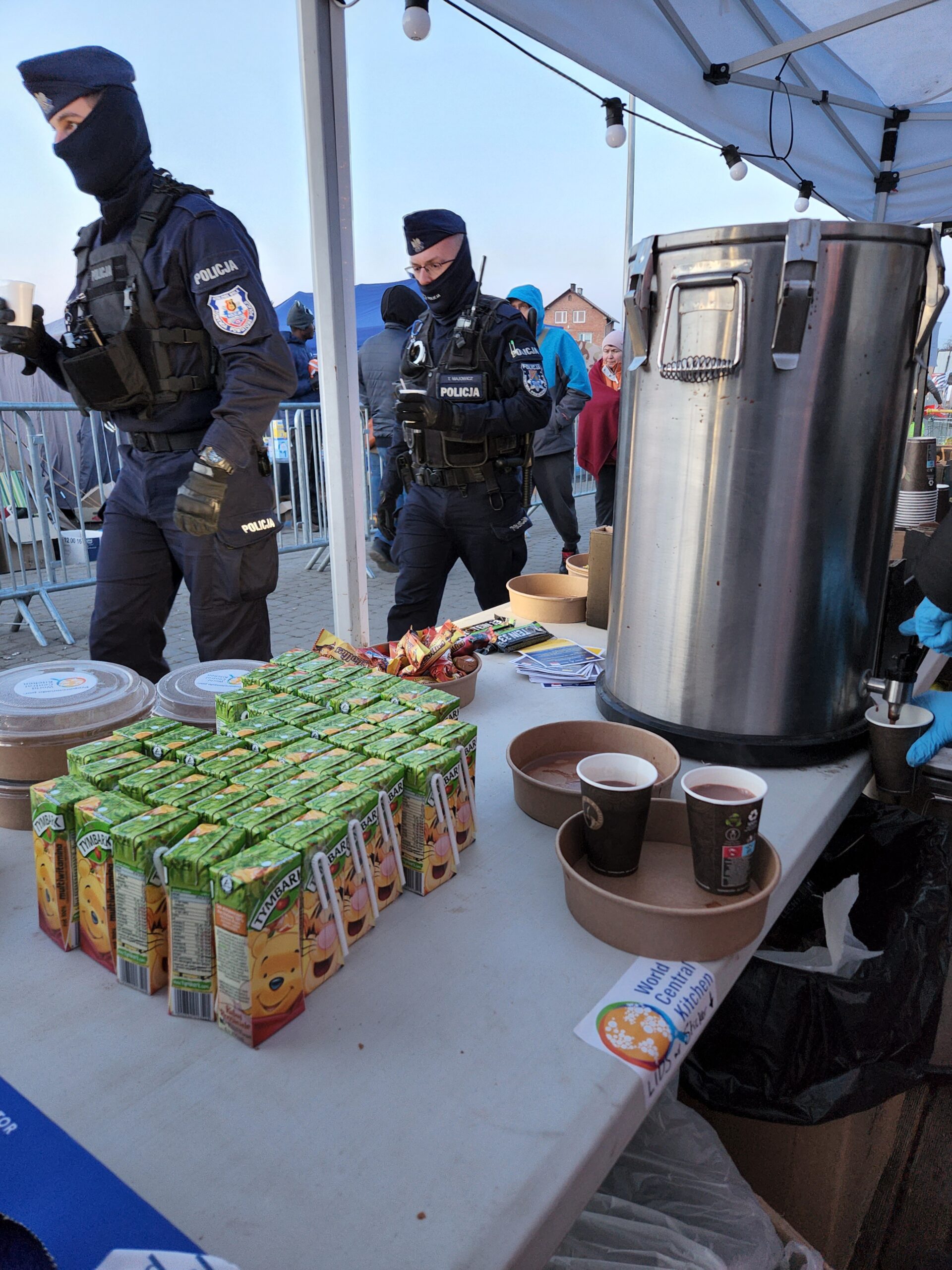 Sam’s Club, Super Target, Tesco. They’re all the same. The Tesco in Medyka was empty, maybe it was being refurbished or maybe it would move. It’s not important. This Tesco is the first Polish stop for many Ukranians. It’s all tents at the border crossing, a mile away at Tesco there’s cots, a roof, proper bathrooms and lots of help. The main shopping hall of this Tesco with its soaring ceilings and grey walls now holds over three thousand cots with but a foot of space between each. The type of cot MASH’s Hawkeye slept in; wooden frame, slim pillow, thin sheets. Inside Tesco there’s Ukranian and Polish agency help. Translators and government officials that listen to the needs of each and try to find them a better temporary home. I’d guess many of the women and children from Ukraine have gone a week or more without a shower or change of clothes, such is the present reality of their country. On Friday we were sent here to clean up our inherited cafeteria space and turn it into something worthy of our name.

Our corner was stacked with boxes and I was asked to open and inspect each. In short order I realized they’re all the same. It’s all sandwiches and the writing tells me it’s from churches, apartment buildings, elementary schools. Ordinary Polish civic groups with a desire to help.

Sadly these sandwiches have gone unrefrigerated for days and must be thrown out, and there’s many hundreds of them. Later there’s Ikea furniture to put together which calls for a run to the Home Depot-like Castorama across the highway for a 10 millimeter wrench and yours truly volunteered to navigate that store, as I know my millimeters. It’s all pictographs anyway. Our entry and exit from the Tesco meant moving past a gauntlet of soldiers, security agents that look like federal officers, and proper Polish cops carrying a dizzying array of fighting tools. My Polish friends told me their Police Academy is a year long commitment and begins like our Marine’s basic training. The broad shoulders and trim waists of these officers leaves me in agreement.

After several hours of hard work our corner felt worthy of World Central Kitchen. We stacked the paper and plastic products on new shelving, created a flow line for the popular coffee and hot chocolate, cordoned it off with pallets and someone had covered the pallets with cardboard and staged crayons nearby. In short order Ukrainian kids have decorated it. As we neared the finish line, Payton handed me an envelope of “Drawings for Ukrainian Children” written in French.

“Why don’t we tape them to the wall above the shelves?”
“Great idea, Payton.” I stood on the cabinet, at the sturdy intersection and he handed me the artwork and tape. Soon they were all up and I had marked each with a teardrop. When I jumped to the floor Payton held me in a big hug. We were two tough guys, holding one another in the middle of so much agony and anguish.

“We’re done here, Malik.” I agreed because a new group of volunteers had showed up with proper hot food and hot chocolate and we had an hour plus drive back to Rzeszow. He went to find our missing companion while I excused myself to the men’s room and passed 20 women lined up for their turn, and no line for the men’s room. When I opened the door I glimpsed a young lady, she was sitting against the wall of the urinal and crying into her phone.

She wore the dust of someone that traveled a hard road; her eyes were bloodshot, her hands trembled, and she spoke with the raw emotion of someone that just lost a dear friend, or worse. Some emotions are universal, no matter one’s language.

I quickly left and found a line of portapottys outside. At times I’ve thought about the bigger picture. How did we let this happen? How could one man cause so much grief and destruction? Where is this God I’ve prayed to? The God of the Old Testament that offered a sword to David, Moses, and Abraham. And I found that God in the spoiled boxes of sandwiches, the volunteers from across the globe, the Polish mayors opening up their towns, and the elementary school artwork of kids in France.