I loved watching the summer Olympics and its mix of ancient warrior sports tied with the relatively modern touches from cycling, tennis, diving and gymnastics.  In the 16 days of competition there was so much exceptional athleticism on display it’s tough to pick a favorite, but I will.  My vote for the grittiest display of competitive Olympic spirit goes to Marianne Vos of the Netherlands, the winner of the gold medal in the women’s cycling road race.  The race was contested over 87 miles of pastoral English countryside and familiar London landmarks but the real challenge was the weather.  Those miles were a mix of light rain, showers, heavy downpours and brief glimpses of impending showers.  Cycling on a rain slickened public road is an endeavor best left to the (fool) hardy.  Road cycling is fraught with dangers even on a lightly trafficked road in sunny weather.  Mix in some rain and wind and now one has to deal with reduced visibility, greater stopping distances and significant loss of cornering traction not to mention the misery of being soaking wet in a 25 mile an hour breeze.  Now throw in 65 other riders, all with dreams of victory and all of them hoping to end the day with their skin and bones intact; riding in very close quarters for several hours in miserable conditions.  Furthermore, the most dangerous part of wet weather cycling comes from riding across lane, traffic signal and stop sign markers; painted road surfaces that offer all the friction of a non-stick pan coated with olive oil.

Over the course of the race, Marianne Vos’ Dutch teammates softened up her main rivals with repeated attacks at the front.  With about 25 miles to the finish, the trio of Lizzie Armistead, Vos and Russian Olga Zabelinskaya powered away from the main group of riders and formed a temporary alliance as they carefully maintained their tempo and distance from each other’s whirring spokes and rooster tails of rain water flavored with road salt and motor oil.

Her face caked with road grime, her body soaked to the core, Marianne Vos had one significant obstacle to gold; a sprint against the hometown hero and crowd favorite, Lizzie Armistead.  Armistead, whose day job coincidentally is racing bikes for a team based in the Netherlands, is a former track cyclist and winner of the most recent grueling Gent-Wevelgem race in Belgium.  She is fully capable of beating Vos in a sprint.  With the added energy of Armistead’s fellow Brits cheering her on, and with the opportunity to secure gold in front of her countrymen, Armistead looked like a woman on a mission.  With about a mile to go, Vos and Armistead eyeballed one another and tossed their water bottles, shedding a few precious ounces which could be the difference between silver and gold. Zabelinskaya, a time trail specialist with almost 10 years on her two rivals either forgot or declined and at that point it became a race between two very determined women.  Zabelinskaya led them out and when Vos bolted, Armistead clung to her rear wheel.

Sprinting in the rain is an exercise in risk acceptance.  How much risk you’re willing to accept determines how hard you’ll try.  We’ve all spun our car’s tires in the rain, perhaps pulling away from a stop sign or traffic light but a road bike offers less than a half-inch of contact between you and the road.  Once you stand up to sprint and start yanking on the handlebars and pushing bursts of energy to the rear tire, you’re dancing with physics at 35 miles an hour.  And when a cyclist falls in a sprint, their clothing offers roughly the same protection that a Victoria’s Secret negligée would against a stump grinder.

Marianne Vos stood up, gritted her teeth and sprinted with the gutsy determination worthy of the Olympics, twisting the bike as if the road were dry as a bone and lined with layers of feather pillows.  Lizzie Armistead was simply outgunned.  Vos, coated with oil, rain, dirt and adrenaline, crossed the finish line with her fists clenched and a tear in her eye.  Well done, Marianne. 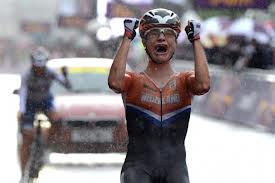