Jason Scholz, the Chef/Owner of Stella’s Bistro is one of the hardest working chefs I have ever known.  Yet he has also surrounded himself with a creative and enthusiastic staff such as Jay Powell, one of our bartenders.  Now that it’s strawberry season, Jay decided to make a few infused spirits with the glut of fruit we are seeing.  Every week he makes a batch of strawberry rum.  It’s rather simple, he just takes a bottle of 10 Cane Rum and pours it into a large jar with about two quarts of sliced strawberries in it then lets it sit for about a week.  Then it gets strained through cheesecloth and the result looks like this: 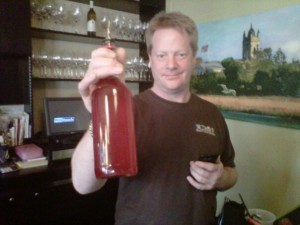 If you think that sounds delicious, you should try one of his strawberry mojitos made with this infused rum.  Jay passed one around the kitchen and we all thought it was wonderful. 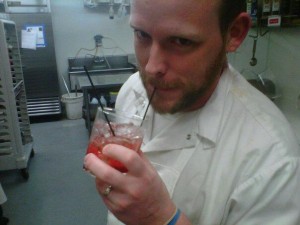 The next day he decided to make some Limoncello.  This is a bit more involved so here’s the recipe:

Wash 10 lemons then peel, you want only the outer yellow zest.  Place the lemon zest in a glass jar then add one liter of 190 proof alcohol, basically Ever-Clear.  Now close it up and place this in the refrigerator for three weeks.  Next carefully strain the alcohol, discard the lemon zest then return the alcohol to the jar.  Now make a simple syrup with one pound of sugar and 2 & 1/4 cups of water.  Just put these ingredients in a sauce pan, bring to a boil, stir until it’s mixed then cool.  Now place this syrup into the glass jar with the strained alcohol and again, return it to the refrigerator for three weeks.  Limoncello is best enjoyed very cold and in small quantities.

So by mid-May we should be serving house made Limoncello.   Pretty cool, right? 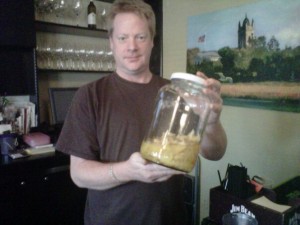