Jason Scholz, Chef/Owner of Stella’s Southern Bistro loves a good fried green tomato, and we serve plenty of them.  It’s a year-round staple because it’s what the customers want.  Yet Stella’s also serves the finest charcuterie in the South.  You heard me, the South.  Charcuterie is the process and technique of grinding, curing, smoking and preserving meats.  Bacon is probably the most ubiquitous form of charcuterie but think ham, dry-cured sausages, pate, terrines and our favorite at Stella’s, stuffed meats. 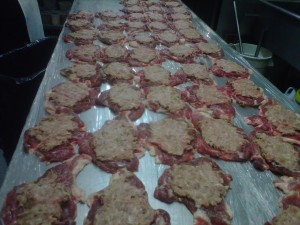 Deboned Duck Leg filled with a forcemeat of ground duck, shallot, garlic, seasonings, brandy and pistachios. The leg bone has been removed along with the sinew, the leg meat was seasoned with salt, pepper and thyme, pounded then filled. 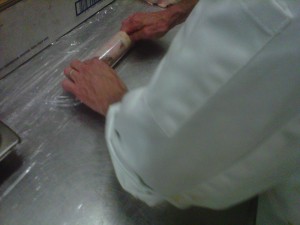 Now this gets rolled up inside of plastic wrap. It has to be wrapped tightly, sort of like you would a burrito. I wrapped it twice and twisted it tight. 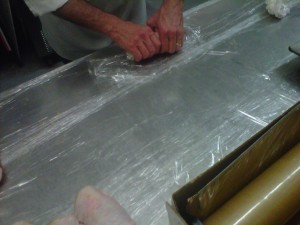 I squeezed the stuffed leg as I was rolling it 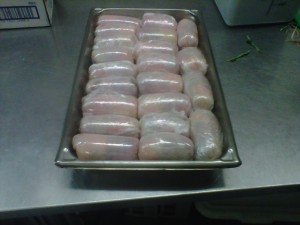 Now they all get packed tightly into a hotel pan and bake at 325 for about 45 minutes, since they're wrapped up like this, they basically steam. 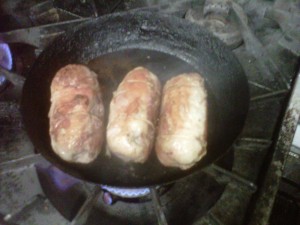 After they steam, the stuffed legs go into the cooler overnight. Then we unwrapped them, tie with butcher twine then sear. The searing puts texture and color on the outside. 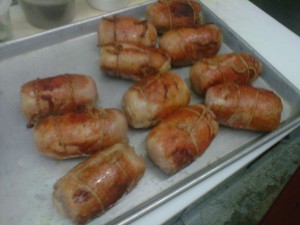 Now the string gets removed 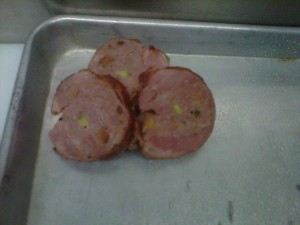 Then we sliced the duck leg terrines and here you go 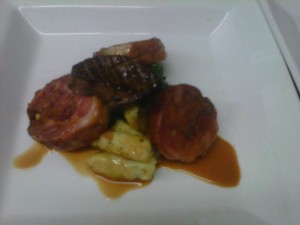 And here's how we served it, Truffle and Thyme Gnocchi, Sauteed Local Spinach, a piece of seared Foie Gras, three slices of Duck and a Roasted Duck Pinot Noir Sauce

So that’s why certain restaurants stand out, it’s the amount of labor they are willing to invest in their customers.  This dish was served at a private party but it’s typical of the energy that we devote to the food at Stella’s.  It’s not that big of a deal to throw a 10 ounce filet mignon on a grill, a dash of salt and pepper then a dollop of Maitre’d butter.  I know, we all love a good grilled steak but there’s not that much of an investment in a simple dish like that.  A memorable duck leg, now that requires a serious level of committment.  From both sides, the kitchen and the customer.