It was just another late Spring afternoon, the warm May breeze had our neighborhood’s flowers dancing and our minds on thoughts of a summer filled with a lot of nothing.  The four of us were walking home from the pool when Holly said we were being followed.  We looked back and saw an obviously lost, un-collared, full-blooded Boston Terrier tagging along behind us.  Her ears were pulled back; her eyes wide open as she searched for a familiar landmark.  She followed us home where we all agreed to round her up and this little Terrier readily agreed to come into our yard and receive some attention.  We thought surely the owner would appear momentarily so we kept an eye out for a slow moving car or a neighbor with an empty leash.  When the sun went down we placed her in our backyard, much to the chagrin of Bonnie, our Jack Russell Terrier.  The next day we did what any dog lover would do; we placed flyers on telephone poles, put ads in the paper, called all the vets and waited.  Surely no one would let a Boston just wander off, right?  Days turned into weeks and weeks into months and all of our efforts went unanswered as our little Boston soon became part of the family.  Amy even gave her a new name: Pip, after another Boston Terrier we had once known.  Pip was quirky, sweet and silly, without a mean bone in her body; the polar opposite of our Jack Russell.  Bonnie was protective, clever, cunning and suspicious and didn’t care for some free-loading wanderer.  Eventually Bonnie became agreeable, took her new found companion under her wing and tried to teach her the ways of a Jack Russell.  Bonnie would stalk anything and delighted in chasing squirrels.  She would sit patiently and wait for two or three of them to crunch down an oak tree then as they sniffed their way ten or fifteen feet from their tree, Bonnie would tear across the yard on a suicidal sprint, determined to have squirrel for supper.  Pip would watch then eventually joined in the chase yet Pip was never sure of why she was running.  She bounced along behind Bonnie, with her eyes alight and tongue hanging out, looking like a canine version of Huntz Hall.

She ran because Bonnie ran and that was enough for her.  On our trips to the beach she usually took one splash in the ocean then sat and watched as Bonnie attacked wave after wave.  When we went camping Pip would burrow into a sleeping bag, her eyes full of worry while Bonnie plotted the midnight mauling of whatever animal dared to venture within her range.

Pip came into our lives when Bonnie was already 11 years old and I’ll never forget the way Pip sat in the backyard and waited for hours, wondering when Bonnie would return.  Bonnie was the perfect dog for me, she could hike all day, swim all afternoon and never shied away from a confrontation.  When Pip became our sole dog, I also mellowed and Pip became comforting, a respite instead of a comrade in arms.

In the last six months, Pip’s health declined precipitously.  She lost her hearing; developed cataracts then a few months ago became incontinent.  Our friend and vet Sally believed Pip’s brain had deteriorated via a sort of dog Alzheimer’s.  Pip was never the sharpest knife in the block but she was certainly the sweetest and I’m sure if she could talk she would have been mortified of her state of health.  At night Pip used to calmly slip into her cage yet in the last few months she became easily frightened, the cage became a prison and not a home so she slept on our bed.  In the last month or so she started falling off the bed; perhaps she was trying to jump down and could no longer judge the distance?  She would routinely bump headlong into furniture, walk into a closed door or stumble into the street.  When her weight started to drop off, in spite of her full meals, we all agreed it was time. On a warm Spring day, I buried her at the end of a meadow of dancing flowers, much like the day when she stumbled into our lives.  I dug into the thickly rooted earth with a double bladed axe, dirtied my feet and bloodied my hands because this shouldn’t be easy. 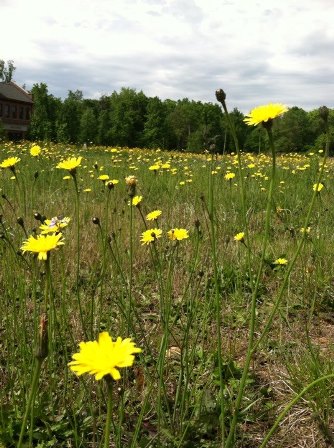 Six months after Pip had been with us a lady called and told us that this was her mother’s dog.  “If you smack a rolled up newspaper in your hand and yell, she’ll run under the bed.”  I hesitated then said I wouldn’t know about that but Pip was enjoying her time with us.  “Keep her.  Mom’s already forgot about her.”

When we lose a beloved pet, it’s also a loss of a bit of ourselves.  Pip was with us on many grand adventures and family outings, a faithful companion and a link to our younger days of toddling kids that dreamed not of college but of third grade and cakes with ten candles.  I like to think that Pip lucked out with us; we never rolled up a newspaper and yelled at her, she ate well and she saw many wonderful sights.  I know this may sound trite but I hope she’s been reunited with Bonnie. 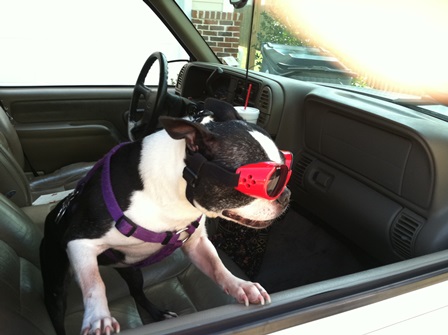 Ready for her next adventure