Anyone can cook a whole hog, it’s not as daunting a task as it may seem.  In the South, that kind of cooking happens every weekend.  Whole hog BBQ is usually done in support of a big event such as a birthday party, church gathering or a fundraiser for a local charity.  But if one wants to stand out in a crowd of well-known, fund-raising, BBQ aficionados then that can be a challenge.  Jeff Bannister likes to stand out in a crowd; which is how he ended up cooking a whole steer.

“The first year we did this it was to show appreciation to my team, all the folks that work with me and have helped make the company successful.  I wanted to do something special for them, a memorable way to say ‘thank you’.  I’d been reading about Chef Francis Mallman in Argentina, he’s one of the top chefs in wood-fired cooking and he’ll cook anything over an open fire.  So I decided I would cook a whole steer for my company’s appreciation party.  I enlisted some help from a few BBQ friends and it was a big success.  We had such a great time that we wanted to do it again.  From that company picnic we started Bovinova, which in 2012 was able to make donations of just a shade over eight thousand dollars.  This year we hope to hit a bit more, it’d be great to hit ten thousand.”

At this year’s event (May 10 & 11) Jeff and his team of cookers will slow roast a llama, pigs, wild boars, turkeys, lamb, goats and of course a whole steer.  Bovinova is so unique in the BBQ world that last year’s event was featured in the Wall Street Journal.

“I really wanted to create something one of a kind and in so doing make a significant contribution to some of my favorite charities but it had to be something memorable and wonderful, an experience that I could share with not just my friends and family but with the community at large.  This year we’ve had a lot of changes; we outgrew our previous location so we’re in a bigger setting.  We’re cooking more animals than ever and all the good press has given us more options.  We’ve contracted with a private rancher in the north end of the county and he’s raised a steer for us, it’s a Scottish Hybrid, all grass fed.  I’ve had it looked at by an expert from Clemson, then after slaughter we’ll age it for 25 days.  When it’s time to cook we’ll inject it with five gallons of our own marinade made from red wine, apple juice, some Lea & Perrins, cayenne, salt and pepper.  When it’s ready for the fire we’ll rub it down with eighty five pounds of dry rub then onto the fire it goes.  The mid-section tends to cook the quickest so we have a sheet of steel to protect the ribs and loins from overcooking.  We use laser and internal thermometers to constantly monitor interior and exterior temperatures so that we get the juiciest, most tender, wood-roasted beef you can possibly imagine.  We’ve had seasoned barbecue professionals have a slice of this beef and it just stops them in their tracks, it’s that memorable.”

For this year’s event, Jeff is also cooking three goats.  He’ll carefully prep the goat carcass, rub them down with a paste of red wine and ten pounds of McCormick Jerk seasoning then place each in an industrial bag to marinate for two days.  The three lambs will get a marinade of rosemary, red wine, salt and pepper.  He’ll cook three or four pigs, one done in Asado style with a chimichurri, one will be in classic Southern BBQ style and another Cuban style.  He also has a couple of wild boar and of course that llama, young chickens, turkeys and something a bit different, a mouclade, it’s a method of quick roasting a thousand mussels at once.  Bovinova will feature plenty of live music and entertainment; it really is an exceptional event for the BBQ aficionado. 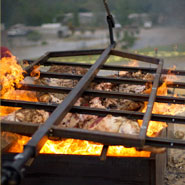 “The best part of all this is being able to make a significant donation to someone like Special Olympics.”  All he needs to hit the ten thousand dollar mark is another key sponsor; for this year’s event, the proceeds will go to Special Olympics and Loaves & Fishes.  So if you’re serious about your barbecue, you really should be at Bovinova.