I finished my shower, toweled off then walked into the bedroom.  My wife’s eyes momentarily twinkled until she saw the baseball sized bruise on the left side of my chest, just above the third rib.

“What on earth happened to you?”

She shook her head and frowned.  “You’re such a damn storyteller, you know that?”

Several hours earlier I had gone out for a 30 mile bike ride and the last few miles were my favorite; climbing up and over Paris Mountain via Altamont Road.  Altamont is 4.5 miles of twists and turns that crests at roughly 2,000 feet of elevation and offers stunning views of the county.  Back then I could go from one side to the other in a little more than half an hour.  This mid-October day was achingly beautiful; an oxygen-rich azure sky set against the brightly colored palettes of dying leaves.  On a big climb there’s plenty of time to take in the sights as the road slowly recedes and the views become more enticing.  When the road drops and starts to lose altitude, it’s time to focus. I gripped the bars of my Cannondale, breathed deep and danced on the pedals as I crested the mountain.  My speed gradually increased as I stole a glance of our city’s skyline through fluttering autumn colors.   The east side of Altamont drops, flattens out then arcs through wide sweeping turns before dropping again so I sat up and took a quick stretch before tucking in.  Head down, eyes up and hands on the outside of the bars.  I eased the chain into the big ring as my feet glided through continuous circles and now I’m looking as far ahead as possible, through the corners and down the road.  A quick peek at my speedometer as it flashes 35 then 37 miles an hour.  Eyes up.  The closer I get to a posted speed limit the more of the lane I’ll take and at this point I was in the middle of the lane.  The reason being is one of space.  If you bend into a tight corner at 30 miles an hour and you’re using the outside of the lane, a car may be tempted to pass you at an inopportune place in the road, leaving you with little space to maneuver.  When I’m at the posted limit, I’ll decide where the car will pass.

Now the road glides into a left hand turn.  I lower my center of gravity and arc through the corner on a quarter inch of Michelin rubber at maybe 40 miles an hour, the bike drifts a bit too close towards the guardrail so I drop my left knee about an inch, just enough to tighten my line.  The road straightens out; shift up and let the speed build; 43, 44, 45 miles an hour.  I lift my chest a bit, catch some air to slow down for the tight, right hand corner and that’s when I saw the acorn.  A big one, it’s from one of the many Bur oak trees on this road and this darn thing is almost as big as a ping pong ball and a lot heavier.  And though I was moving fast I saw the whole thing in slow-motion; the acorn landed in the road maybe 50 feet in front of me, took a high bounce then arced to the right just as our paths intersected and I caught it right in the chest.  A 45 mile an hour fast ball, thrown by the hand of God himself and it almost knocked me off the bike.

I gasped for air, stabbed the brakes then bent into the corner with the shakiest of lines and stars twinkling through my field of vision. I rode the brakes to the bottom of Altamont, parked in front of a church and lifted my jersey.

I grimaced, gently prodded my bruised ribs in search of a crack then glared at the cross of St. James as it reached into the October sky.

These days I usually pedal the Swamp Rabbit trail. 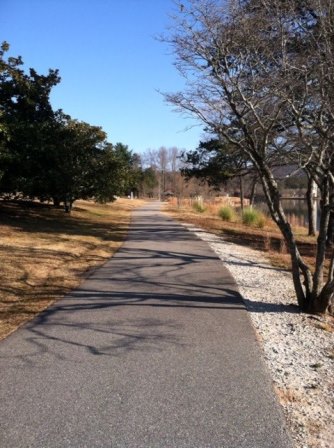 The Swamp Rabbit near Furman University

It’s a paved greenway that glides through the city and can take you from downtown to the northern reaches of the county, all on a carefully paved surface.  There’s a couple of busy roads to cross but the challenge of the Swamp Rabbit comes from the sheer number of users mingling with the wannabe racers as they zip down the path making like George Hincapie on the cobblestones of Roubaix.   It’s opened up cycling to so many folks that see it as a genteel afternoon recreation, just like in cycling’s early days. 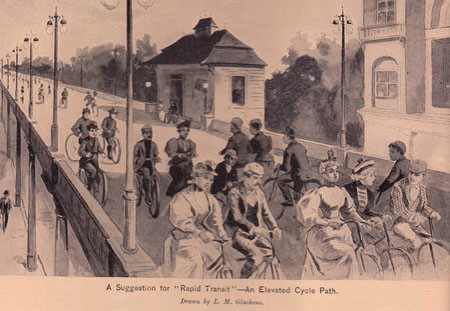 An early look at a proposed cycling path

On a sunny afternoon the Swamp Rabbit is jammed with people of all ages and abilities and it’s created it’s own micro-economy of businesses along its path.  It’s one of the many things I love about this town.  Yet some of us on the Rabbit remember what it was like back in the day, when cycling was so dangerous, even the Good Lord had to remind you to stay focused.