Mary Katherine was petrified and she wasn’t going anywhere.

“Mary Katherine, your team needs you, come on sweetheart, I know you can do this.”  She shook her head no.  She was wringing her hands and beads of sweat had bubbled up on her forehead and upper lip.  Yet I was certain that if she would just get out on the court she would be fine.  I smiled and patted her hand.  “OK sweetheart, maybe a bit later.”

Six weeks prior Mary Katherine had showed up for her first practice with our church league girls’ basketball team.  Although she had never played the game before she’d done well on her soccer team and was a competitive swimmer.  She was the daughter of very good friends of ours and her father had confided in me that she will likely be nervous about getting on the court but she’s a good athlete.  After a few practices Mary Katherine was handling the ball reasonably well and had picked up the mechanics of shooting.  She was listening.  And even better, she practiced at home.  By the time our first game rolled around she knew the game and her responsibilities on the court.  She certainly wasn’t going to be a point guard any time soon but she understood defense, kept her eyes up, and could shoot and pass as well as some of the girls in their third year of playing.  Yet all the practice in the world cannot prepare a ten year-old for their first basketball game in such a confined space.  During practice a gym can be enormous; nine little girls may feel as if they’re in a castle with those soaring ceilings, gargantuan windows, gaping doors and massive light fixtures.  At game time however, a gym can be downright claustrophobic.  That castle shrinks dramatically when stuffed with two full teams, whistling referees, cheering parents, screaming friends and players waiting for the next game.  And unlike in soccer, everyone is crammed right to the edge of the playing surface.  As we took our seats on the bench, the tension on Mary Katherine’s face was clear so I made the decision to start her.  My assistant agreed; let’s get her out there right now.  When we huddled up and she heard the line-up, she shook her head no.  Her teammates encouraged her but she was petrified and was so nervous I was afraid she may throw up or burst into tears so I relented.  As the game went on her teammates took turns asking her to go in, all to no avail.  When the final whistle blew, I smiled and told her she would be ready at the next game.  On the way home I asked my daughter Holly if she had any ideas.

At our next game I pulled my starting forwards, Rebecca and Holly, aside.  Just prior to the start of a game, the teams gather around center court, hold hands and say a short prayer.  I asked Rebecca to stand on one side of Mary Katherine and Holly on the other.  The team thought Holly would start as small forward but immediately after the prayer Holly squeezed Mary Katherine’s hand, told her she was ready then ran off the court while Rebecca held tight.  Mary Katherine was visibly shocked.  Rebecca offered encouragement.

“Stay opposite me on the court and you’ll be fine, OK?”  Mary Katherine hesitantly nodded then turned to me with a look of betrayal.  I smiled and clapped for her.  The referee held the ball for the tip-off and off we went.  As the teams went at it, all of the lessons learned in practice fell into place and Mary Katherine was soon comfortable and playing hard.  She ran, blocked, passed the ball to the open player and even set a pick.  She did have an opportunity to shoot but passed the ball away after taking a look at the goal.  When the quarter ended she ran off the court smiling as big as only a little girl can.  In the next game she was eager to go in and I reminded her not to be afraid to miss.  “I don’t care if you miss so long as you take the shot.”  When she got her opportunity she cut from the wing to the outside edge of the shooting lane, took a pass from the guard, turned to the goal and shot.  By her stance I knew that ball was going to drop.  At that age girls need to use their entire body to get the ball to the goal and she did exactly that.

Point your feet, knees and shoulder at the goal, come up straight and don’t let go of the ball until it’s over your head and you can see the goal.  Push the ball away with the fingertips of your shooting hand then pretend to drop your fingertips into the net.

The net snapped as the ball moved through, her teammates and family erupted and Mary Katherine practically skipped down court as she took up her defensive position.  Did we win that game?  Honestly I don’t remember but I can still see the smile on that little girl’s face.  The hug she gave me at the end of the game almost knocked me down.

Mary Katherine and her family moved away the following year.  They were recently in town visiting family over the Christmas holiday and we were all able to get together.  She’s practically a young woman now; she beamed when she saw me then offered me a hug. Although she’s in eighth grade, she’s running track on a high school level and doing very well.  When I quizzed her on her favorite track discipline she smiled and counted off the events. 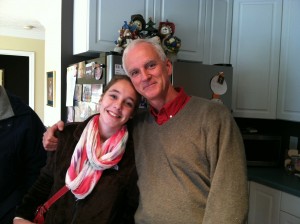