On Friday morning, July 17th, I’ll climb onto my Trek Road Bike and join 285 cyclists and pedal across the state of South Carolina.  Yeah I know. It’s gonna be hot, and cycling is dangerous, and I could hurt myself, and I’ll probably get sunburned, etc.  I’ve heard it all.

And all of that is accurate.  I could get hurt. It will be difficult. I might get a first-class sunburn, and definitely a sore butt.  I’m also planning on having the time of my life and along the way, helping the South Carolina Alzheimer’s Association collect about $250,000 or more in donations.  Yet in the swirling money pit that is Alzheimer’s disease and its associated dementia, that amount is a drop in the bucket. Every year our country spends hundreds of billions on the treatment, care, and research of this killer so what could one guy on 20 pounds of aluminum, carbon, and rubber possibly bring to the table? 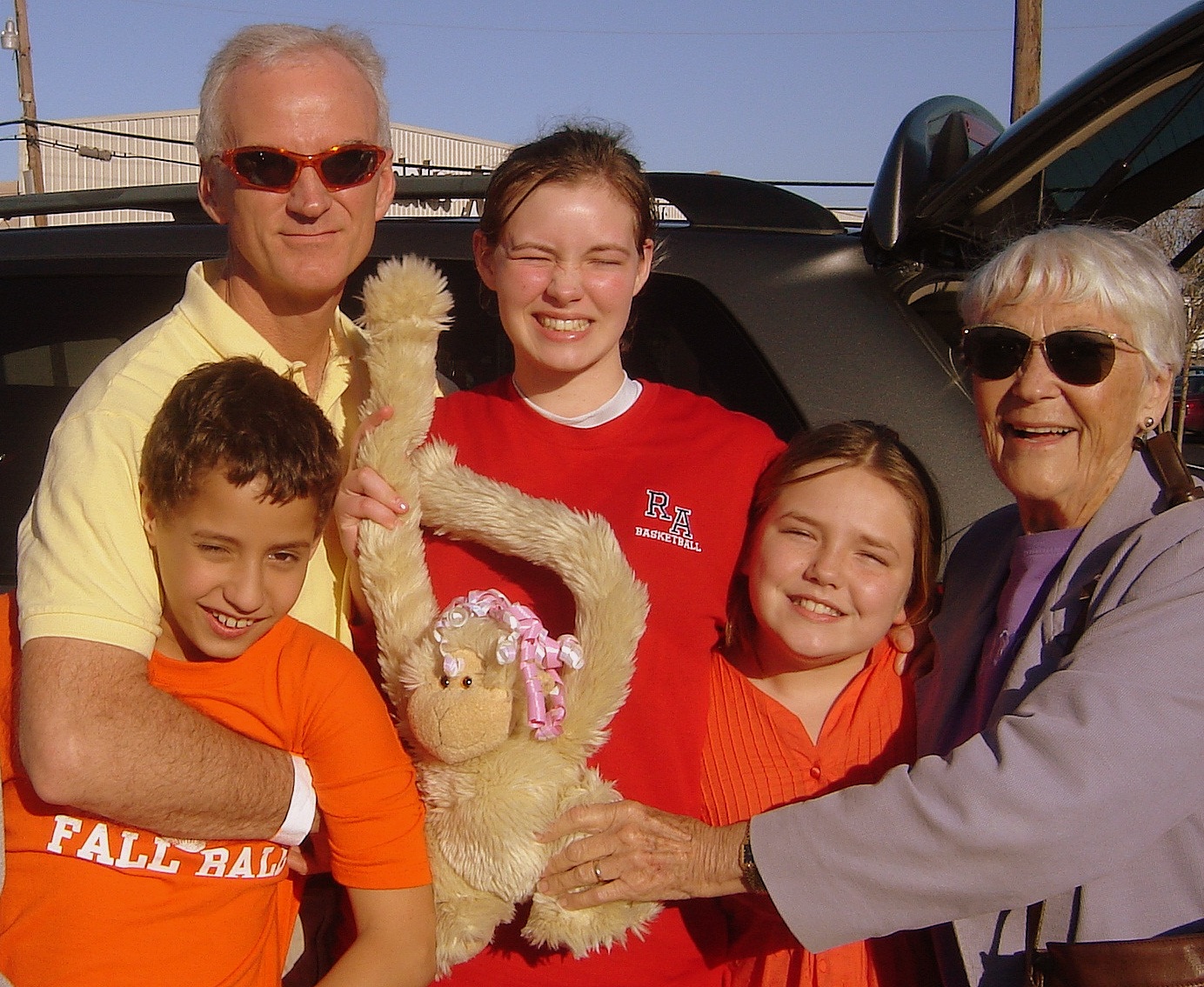 That’s my Mom in the shades. Before Alzheimer’s stole her smile.

The answer is, I don’t know. I don’t know where the money that I help raise will go. Perhaps it’ll help pay for printing costs of new dementia care pamphlets, maybe a raise for an office worker, or new carpet in an office. I really don’t care how it’s spent, I just want it spent. The real effect will go beyond the money. If I and the other riders can call enough attention to this dread disease then perhaps we’ll help ferret out real money. Will the sight of nearly 300 maniacs pedaling across 252 miles of 90+ degree heat spur the right notes in a researcher, a neurologist, a big dollar donor? Yeah, that’s why we do it. We’re there to call attention to a disease that has a 100% fatality rate, no cure, and nothing to slow it down. We’re there because our mother or father, aunt or grandfather passed away from Alzheimer’s. We’ve sat there and held their hands, watched as the spark slowly faded from their eyes, and wiped tears away when they asked us who we were. We’re there to provide a place to turn for those family members that have just heard the dreadful news that Mom has Alzheimer’s.

When the diagnosis is Alzheimer’s, the outcome is always the same. In spite of what you may have seen on a sketchy web link on Facebook, there is no cure and nothing on the horizon. Alzheimer’s is a frightening death sentence that will steal away every precious memory before it takes a life. At least with cancer there’s a battle plan; a record of patients that have managed to survive even the toughest, rarest forms of it. They and their doctors have left scars and notes, a game plan for the newly diagnosed, left by the survivors. 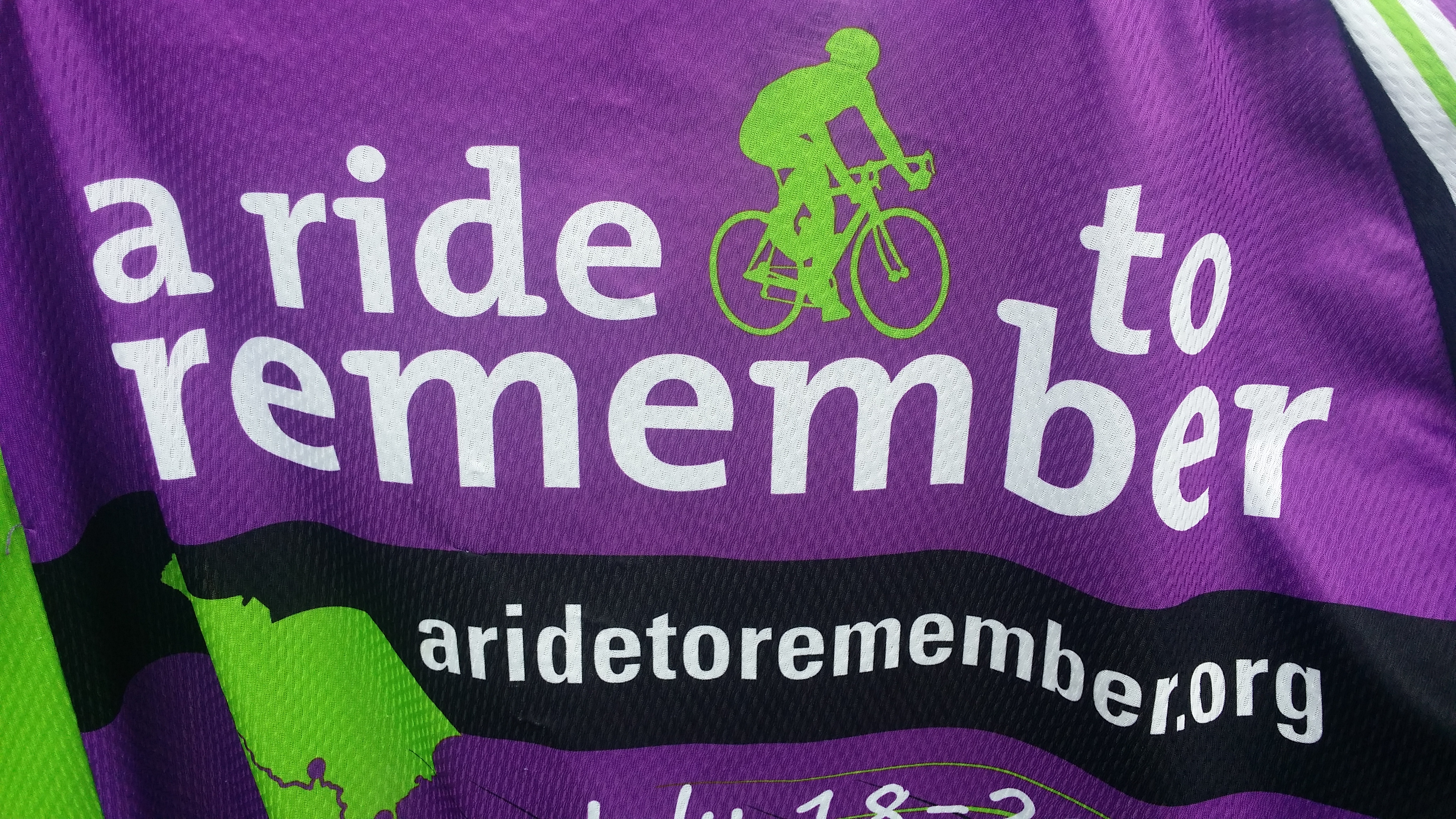 Not so with Alzheimer’s. There’s just the dark reality that one’s mind will slowly wither until even the body’s ability to assimilate food into calories, or oxygen into our blood stream, has been taken away. And there’s a gaping uncertainty because Alzheimer’s affects everyone differently. One may live ten years, or it may take you in less than three.

And that’s why I’m going to do this. I need to do something and I won’t be much help waving and smiling as the riders go past. Since January I’ve put about 1,600 miles on my bike. I’ve ridden through cold days and blistering hot ones, pushed through pop-up thunderstorms, and a few snow flurries. I’ve fought 25 mph headwinds and daunting mountain ascents. Because 252 miles in three days just isn’t something one can get ready for in a couple of months.  I want to be strong enough that if needed, I can pull one of my teammates up a long climb. I want to offer a smile instead of a complaint, a compliment instead of a critique.  I want to help.  And I could use yours. I’ll take prayers, kind thoughts, encouragement, and of course your money. 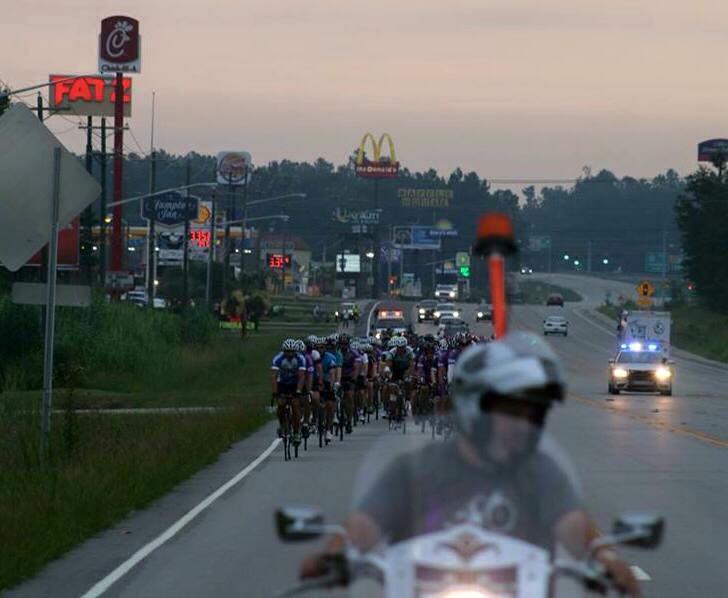 The start of the final stage in 2014. Courtesy David Moody.