This past Saturday my son Tudor and I along with a friend of Tudor’s & his dad took off for Beaufort so we could take in the Beaufort Air Show at the Marine Corps Air Station.  Tudor & I had been planning this trip for several months because the Blue Angels were performing and it’s been four years since we had seen them.

The attraction to seeing a group like the Blue Angels is the display of the skills needed to wrestle those machines and make them perform such incredible feats.  If given the ideal set of circumstances it is conceivable that some of us could fly an F/A-18 straight and level but to make an F/A-18 really dance, well that requires someone like a Navy pilot with years of intense training and dedication.  Seeing the Blue Angels live is, short of a space shuttle launch, the ultimate expression of man and machine.  Aircraft like the F/A-18 are amazing machines and the men and women that fly them are gifted in a way that normal folks like me find mesmerizing.   I have seen the Blue Angels perform maybe a dozen times and it is the pilot’s skill that leaves me amazed.  The jets are very cool but would anyone go see a bunch of radio controlled jets buzz around an airport?  Probably not.  When the engines spool down and seemingly normal men step out of the cockpits for a brief moment I think that if I had only made just a few minor changes in my life that could be me stepping out of that airplane to the appreciative roar of thousands. 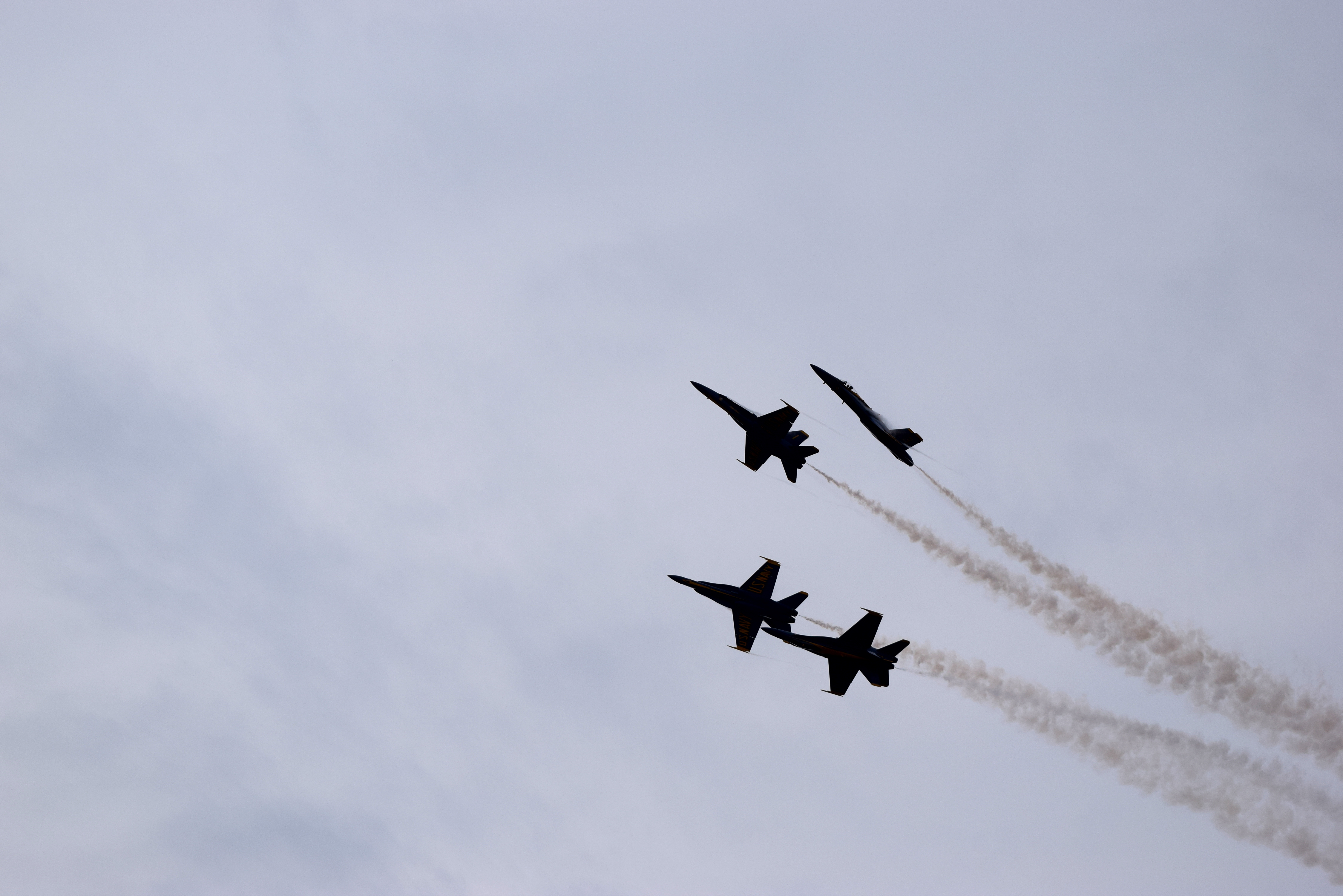 We arrived in Beaufort Saturday afternoon planning on spending the day downtown, catching the show on Sunday then driving back to Greenville immediately after.  About 3:30 we hit what I assumed was air show traffic just in front of the gates of the Marine Corps Station and then we just sat there and waited.  We heard a few sirens and saw flashing lights ahead of us and then nothing.  We waited for close to 45 minutes until a lady in the car next to us said she just heard on the radio that one of the Blue Angels had crashed.  Impossible, I thought but we turned on the radio anyway and started searching for some news.  Sure enough, one had gone down just about a half mile from where we were.  No wonder we hadn’t moved.  The kids were shocked and kept asking “what happened” but of course no one knew anything other than one of the Angels had gone down.

Much later we got to downtown Beaufort and naturally everyone we saw wanted to talk about the crash and almost everyone had an opinion of what went wrong.  He hit the trees, he ran out of fuel, clipped the power lines, hit a bird, blacked out, lost an engine and on and on.  The most ludicrous assessment came from the owner of an art gallery that claimed that “the maintenance of those planes is not that good”…excuse but are we talking about an old Trailways Bus or the most meticulously maintained machine in the United States Navy’s inventory?  Spare me.

The Blue Angels left early Sunday morning for Pensacola.  Sunday’s expected crowd of 75,000 turned out to be more like 15,000.  The remaining performers dedicated that day to the fallen pilot, Kevin Davis.  Since the crowd was so thin we were able to talk to a lot of the standard military pilots that were there to show off their aircraft.  I spent some time with a F/A-18 pilot and I thanked him for sticking around in light of the previous day’s tragedy and that got us talking about the accident.  He didn’t want to guess as to what went wrong but we both agreed that Davis had time to exit the aircraft, but didn’t.  A modern fighter jet has a rocket powered, gyroscope assisted ejection seat that is capable of launching the pilot up and away and into safe parachuting territory even if that aircraft is sitting still.  Once that happens though, that jet would then become a 30,000 pound, fuel-laden unguided missile.  This pilot guessed that given his speed and altitude Kevin Davis would’ve had two seconds to make a decision. Stay with the airplane or get out? Kevin Davis chose to stay in his falling airplane to guide it away from the houses that would have filled his cockpit’s windshield.  Two seconds… with his Mom and Dad and lots of little kids with their programs and pens in hand waiting for him back at the flight line and instead of getting out, he stayed with his airplane and kept it from punching a hole into someone’s house.

The only injuries on the ground were minor.

Today the word hero is used so often it has practically lost all meaning.  The sports commentators are constantly using “hero” to describe multi-millionaire cry baby pro athletes.  Baseball and basketball are great sports and yes there is a chance of injury if you play hard, but heroic?  Not in my book.  When I was a kid a hero was someone that risked his or her life in order to save someone else, period.  We admired pro athletes and certainly wanted to be able to throw a football like Archie Manning but we didn’t consider Archie heroic, just a great quarterback.

On that sunny Saturday afternoon in Beaufort, Kevin Davis did something heroic.