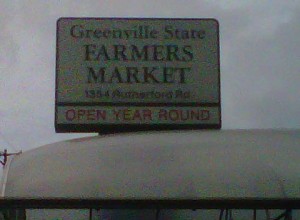 Our state market is in an industrial part of town and attracts a cross-section of the community, unlike the newer open air market that seems to attract only the upwardly mobile set. I’ve noticed this about a lot of the new markets in the South. They’re going out of their way to appeal to all classes but can’t. Our city government is spending money to figure out why the poor and working class don’t attend the downtown market then reaching out to the local community with an awareness campaign. The state market doesn’t have to do this, I’ve met plenty of working class at this market.

When we moved to Greenville in 1994 I had embraced the idea that great restaurant food should have a sense of place.  In short order I ended up as Chef at a recently opened bistro that featured a New-American style menu and I set about creating a regional focus.  I sought out local farmers and one of them directed me to the state market.  SC has three state markets and one is in Greenville.  The market is operated by the agriculture department and it’s a place for farmers to sell to wholesalers as well as the public.  On Saturday mornings, especially in the summer, this place is packed.  About ten years ago the city leaders decided to host a Saturday market on Main street and so like any other American city worth its salt, we have a downtown market.  It’s not really a farmer’s market but more of a street festival with live music, arts and crafts and the occasional politician out kissing babies and shaking hands.  Of course there’s also plenty of food, both prepared and raw.  It’s all very polished and deliberate and if you want to hang out with the upwardly mobile set, that’s where they are on a Saturday morning.  When our restaurant was open I preferred to go to the state market.  It’s rustic and authentic and if you wanted to see the true side of our agriculture community and meet generations-old artisans and farmers then this is the place.  Canners, farmers, bee keepers and bakers are piled under the roof.  A July visit was the highlight of my week, our restaurant was small and business would always slow down in July and August right when the produce was at its peak.  I often felt like I should be buying more because I wanted to do my part in keeping these guys in business.  We closed our restaurant four years ago (Want to make me cry?  Try talking about 2008) and today even the 7-11’s are touting slushies are made with “locally sourced ingredients”.   On a rainy Friday morning my son and I paid a visit to the market and the produce was abundant and beautiful.  Would you like a tour? 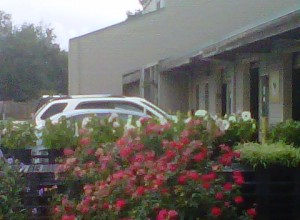 It’s housed in an unattractive metal building close to the railroad tracks. There’s a flower vendor that leases part of the parking lot and keeps his plants and flowers right outside and that does add to the curb appeal. 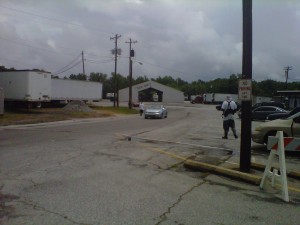 That building in the distance is the truck shed, it’s where the big rigs can get unloaded in the shade. Just beyond that is a chicken processing plant and that gentleman next to the telephone pole is headed that way, it was just after 12 so I assume he was on a lunch break. He’s wearing waders, a hair net and a disposable pull-over. Want to know why? Yeah, I didn’t think so. 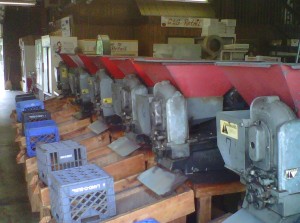 These are pecan crackers. Whole pecans are poured into the red hopper on the top then are methodically cracked by a rotating metal mechanism then dispensed from the chute at the bottom. When all these crackers are running (late summer through fall) they provide an interesting metallic beat to the shopping. 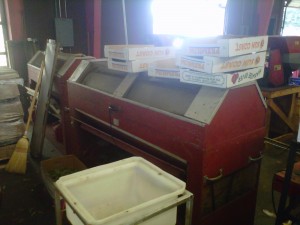 This is a pea sheller. That metal face is the door and inside is a rotating thresher, it looks like a broom stick with forks protruding from several spots. The peas are loaded and as the thresher turns it separates the peas from their pods. Crowders, Black-eyes, Butter, Lima, Lady, Red runner, Zipper, October shellies…you name it, this guy can shell it. 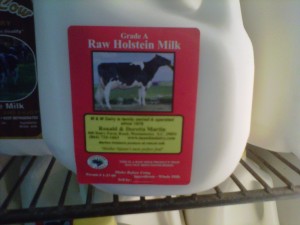 This is also the only place in town that you can find raw milk. I do not drink raw milk but I do use his raw buttermilk. It’s great in biscuits, muffins and pancakes.  You can also find local rabbit, sausage, cheese and ground beef. 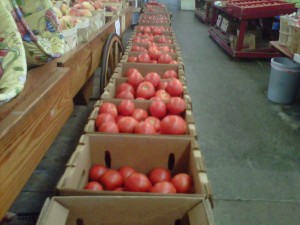 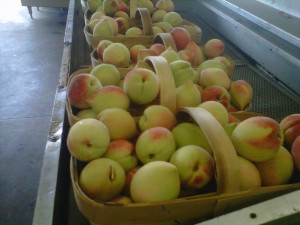 Only California grows more peaches that South Carolina and most of those left coast peaches end up in cans, ours are all sold fresh. These are “White Nectar” a very sweet white fleshed peach. Only .99 a pound! 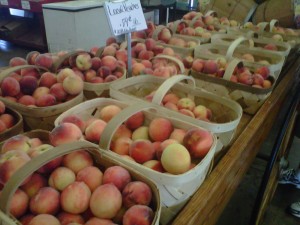 The peaches in the foreground are “Contender” a sweet, orange flesh variety, on the other side are “Red Globe” and those are very sweet with more red on the skin. These are only .89 a pound. 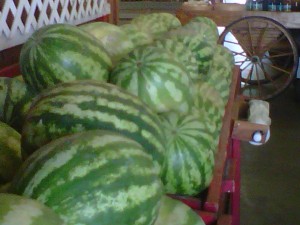 The watermelons are so sweet this season 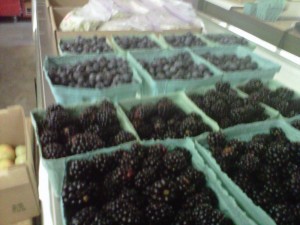 Blackberries and blueberries. The blackberries have been exceptional. 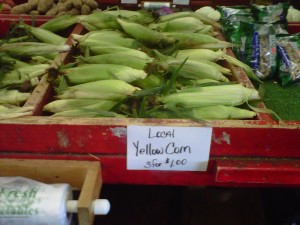 Three for a dollar 😉 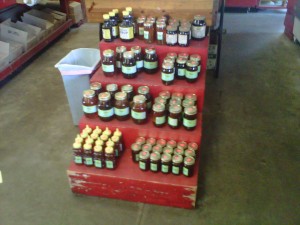 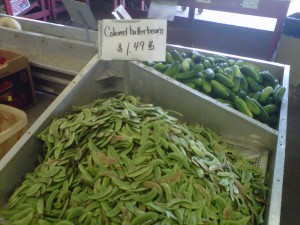 Butter beans, still in their shells and some local cucumbers. 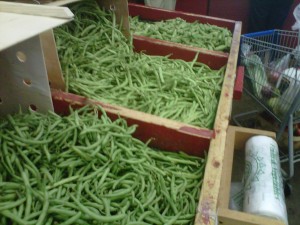 Two varieties of green beans and some local okra. Okra’s expensive, 2.49 a pound. It takes up a lot of room in a garden, is tedious to harvest and is very much in demand. 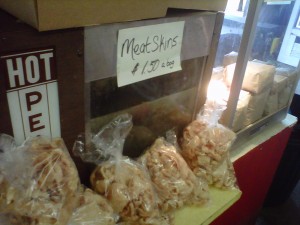 Meat Skins! These are salted squares of pork fat that are deep fried. These are fried right here in a huge, propane fired vat and they are so delicious. Also known as fried fatback, it’s certainly nothing you’d want to eat on a regular basis but no worse for you than a bag of potato chips or Frito’s. Next to that is a peanut roaster and they also have boiled peanuts too. 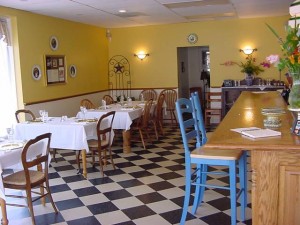 Couldn’t resist. This was our restaurant’s dining room where those peaches, squash and okra performed five nights a week.  This was taken in 2005.

There was also watermelons, cantaloupes, local honey, country hams, sweet and spicy peppers, molasses and local eggs.  I’ve got nothing against the rash of new markets that have sprung up.  It’s great for everyone and the more venues that farmers have to sell their goods, the better it is for all involved.  But the tag lines of “locally sourced” “artisan” and “sustainable” are perilously close to over use and could lose their meaning.  Has anyone noticed that McDonald’s is now saying that they are a “global network of local family restaurants”?  Got it?  McDonald’s is now “local”.  I can’t blame them for jumping on the local bandwagon but talk about a stretch.  Whenever I shop at this market those meat skins and pecan crackers remind me that not that long ago, most Americans lived rurally and a lot of us were close to being self-sufficient.  Nothing on the animal or the field was wasted so pecans were gathered and cracked and even the pork skin was salted and fried.  I’m due for knee surgery very soon, then there’s rehab time and once I’m healed up I really want to get back in the restaurant business.  I miss shopping here and being able to spend two or three hundred dollars on wonderful, locally raised produce at the peak of its flavor.  The vendors and farmers that I bought from used to holler at me and smile as they held up a prized tomato or squash, “Hey Chef, git over here, ya gotta taste this!” Later that night my customers would smile and thank me for the effort I put into my shopping.  When we were busy life was very good.  Thanks for coming along.