I’m always taken aback when I cook at a friend’s house and I’m asked if I “mind cooking.”  I’ve actually known chefs that would answer “Yes.”  Seriously, if you don’t love it then why would you do it?  While spending a week at the beach with friends I’ve been doing a lot of cooking and my friends have been very appreciative.  One afternoon I was digging through the fridge looking for supper, we had plenty of stuff but not a lot of anything.  The night prior I had roasted and peeled two red bell peppers in anticipation of making pimento cheese and the peppers were next to some chicken thighs.  In addition we had celery, onions, some leftover boiled red potatoes and a big block of Cabot cheddar cheese.  I turned to Mike and asked, “How does pimento cheese chicken soup sound?”  His eyes lit up and he responded with “Sounds delicious to me!”   I handed the cheese and potatoes to Mike and asked him to grate and dice while I got busy with the chicken, celery, onions and red peppers.

I started by seasoning the chicken then roasting it in a 400 F oven for about 15 minutes.

In a large,  heavy-bottomed stock pot over medium high heat cook the onions and celery in the butter until translucent and lightly browned.  Sift in the flour and stir vigorously until the butter has been absorbed, continue stirring until the mixture has a nice cohesive appearance.  Add the warm milk and continue stirring, you may want to use a whisk at this point.  Once the milk has been stirred into the flour add the chicken stock and cream then continue whisking, turn the heat down to medium low and add the chicken, potatoes and red peppers.  You’ll want the soup to be steaming but not bubbling and it’ll need to simmer for about ten minutes to smooth and soften the flavors.  The potatoes I used had already been cooked so we cut them into large chunks but if you’re starting with raw potatoes you’ll need to allow a longer cook time or cut the potatoes into smaller pieces.  Lastly you’re going to add the cheese, the lemon juice, a shot of Worcestershire, however much Tabasco you prefer and keep stirring until the cheese is fully incorporated.  Taste the soup and feel free to add a little more Tabasco 😉 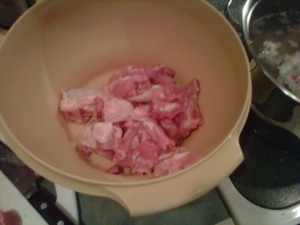 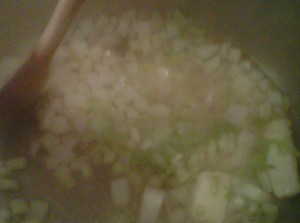 I diced the onions and celery and sauteed these with the stick of butter in the bottom of a tall, heavy-bottomed stock pot. 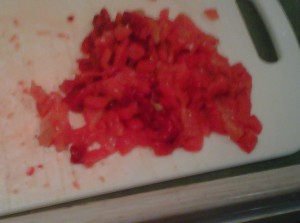 Roasted red peppers that have been peeled, seeded and diced. You can always substitute canned but you’ll get much deeper flavors from fresh peppers. 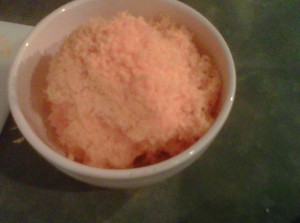 When adding cheese to a cream soup, you need to grate or shred it so that it melts into the soup easily. The cheese will scorch easily so you’ll want to add the cheese right before you serve it. 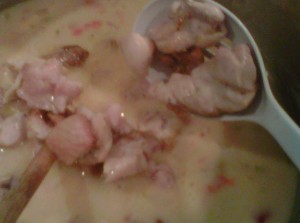 I seasoned the chicken, placed it in a large casserole dish then into the oven at 400 F for about fifteen minutes. This step adds color and texture to the chicken and will provide richer flavor. The juice leftover from the roasted chicken went into the chicken stock I made. 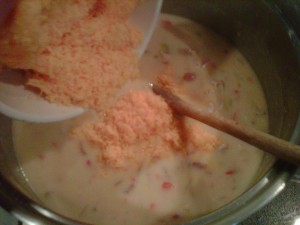 The cheese goes in, I had brought the Cabot Cheddar with us to make pimento cheese but thought it made this soup more memorable than we were expecting. 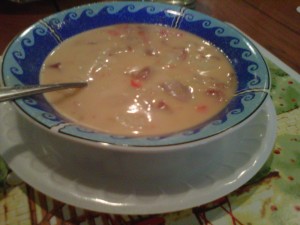 And here’s the finished soup, served on a picnic plate with some crackers and liberal amounts of beach-appropriate adult beverages 😉 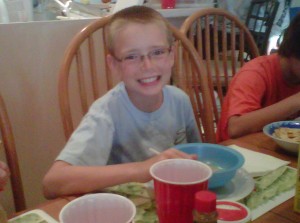 Kids can be a tough audience for a seasoned cook but as you can see from Abram’s smile, the soup was a big hit. 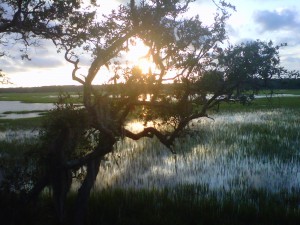 Time for an after-dinner beverage and an Oscar worthy sunset 😉