01 Feb The Greatest Voice on Earth

When our restaurant was open, my cooks could listen to whatever they wanted to on the radio. Punk, Country, Speed Metal, Top 40, didn’t matter to me so long as they were happy and getting the job done.  I never complained either, occasionally I may have commented on a certain lead singer’s ability to carry or not carry a tune but no matter, it was all good.  Until Saturday, because that’s when I listened to the opera, specifically NPR ‘s Metropolitan Opera.  Mozart, Puccini, Verdi, Donizetti.  I love that stuff!  As I used to tell my cooks, when you’re singing to a live audience of maybe a million or more, you’re putting your best foot forward.  Even the big shots like Rene Fleming were no doubt giving their all, singing their hearts out because this performance was for the NPR show.  And I’ll bet anything that when my kitchen crew was trading beers, kitchen stories and small talk at their favorite downtown bar with the other cooks in town, my guys would grimace and say “We had to listen to Chef’s opera today.”  Their friends would most likely cringe, shake their head, maybe pat my guys on the shoulder then offer to buy them a beer.  “Here you go Tony, this one’s on me, you need it more than I do.”  Which brings me to the circus.  I gotta tell you, I’m a sucker for the circus.   I love seeing those big cats, the gymnasts, the guy shot out of a cannon and the high wire acts.  As someone that used to race mountain bikes and would love to parachute out of an airplane (would have to get a new wife first and that’s not happening) I can understand why people do that.  They get addicted to the adrenaline.  The gasps, the applause, the satisfaction of making someone’s heart stop then start again can be exhilarating.  There’s also the choreography to consider, the Ringling Brothers rehearse for many hours just to put on one show.  And what a show, too.   The Ringling guys have European gymnasts, an American cowboy, a Brazilian acrobat and a Russian animal trainer that doubles as the Motorcyclist on the Highwire.  I have to say that perhaps my favorite act is Johnathan Lee Iverson.  Johnathan is the Master of Ceremonies, a former lead singer with the Boys Choir of Harlem, at 11 years old Johnathan sang during intermission for a Luciano Pavarottti concert in Central Park.  The last time I saw the Ringling circus I leapt out of my seat as Johnathan was finishing up the opening piece.  “Damn!  This guy could sing at the Met!”  I exclaimed.  The next day at the restaurant I excitedly told my crew about this amazing voice we heard at the Circus.  Jeff patted me on the back and groaned “thanks for sharing that, Chef.”

The truth is that Johnathan could sing for the Met.  He told me so just this morning.  I was downtown and Johnathan had just walked out of his interview on Your Carolina (Kimberly Kelly and Jack Roper).  It’s hard to ignore a guy dressed like Johnathan so I engaged him in conversation. 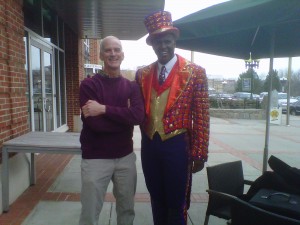 Hard to ignore a guy dressed like this, right?

He was very congenial and only too happy to chat with a fan.  He obviously loves the circus and is living out a dream.  And he loves the fact that he tours with all sorts of exotic animals, despite WC Fields (Or was it George Burns) who famously warned entertainers  never to follow “children or animals”.  Well Johnathan opens and closes with animals and does so splendidly.  We both agreed that for many kids, their only opportunity to see a real Lion may be the Circus.

The Ringling Brothers, Barnum & Bailey Circus is at the Bi-Lo Center tonight through Sunday.  If you really like the Circus or you love Opera, please catch a show this weekend.  You will not be disappointed.