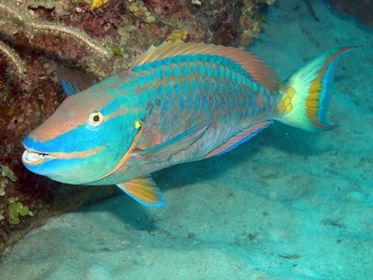 10 Nov The Coral of Belize

The sparkling water stretched towards the blue horizon and somewhere in the distance sky and water melted into one another. Our boat gently bobbed and on shore, a few flags softly fluttered in the salty breeze. I rolled off the boat, splashed into the water and landed on another planet.

Belize is home to the second largest coral reef in the world and naturally, it’s in danger from the prying fingers of mankind. We’re a thousand yards offshore tied up to one of the buoys placed here to keep anchors from dragging across the coral. A dozen large white floats mark the perimeter of the coral bed and we will swim in a clockwise pattern, staying within the floats. To my eye it looks like we’ll swim a bit more than a quarter mile.

Before we set off, our guide, Rayolando of Ramon’s Village, instructs us what not to touch (all of it, don’t touch a thing) and under the watchful eyes of a smiling Marine Warden, here to protect the coral, we slip towards the first buoy. A final adjustment of the mask, a gentle kick or two and we’re gliding across the surface.  Ten feet below us the sea grass sways to the rhythm of the sea. Its foot-long tendrils dance this way, then that, pulled by the tug of this massive body of water stretching from the west coast of Florida to the shores of Central America. We kick, follow Rayolando towards the coral. Our first visitors, a school of several dozen Gray Snappers, gives quizzical glances then falls in line with us. It’s likely they’ve been fed by snorkelers in the past.

Coral isn’t any one thing, it’s a community of oh so slow growing organisms, all in a symbiotic relationship. Coral provides food, shelter, nutrients, and stability to the water. It’s fragile. One touch from a human could remove its thin layer of protective slime and open it up to infection from algae. From there it’s a slow, inescapable death for that entire bed of coral. And when the coral dies, everything else dies with it.

The first coral bed we approach is the size of a minivan and it pulsates with life, a magical alien life. It’s life one would find in a Dr. Seuss book; translucent purple leaves the size of a large pizza, scaly green and orange tubes full of 45 degree corners, some with tiny eyeballs winking from inside, there’s yellow bumps, red rocks, and green bruises. There’s spikes and string and curtains of yellow fabric, all dancing to the beat of the water. Boulders resembling the preserved brains of long departed whales rest on rocky orange lumps while a kaleidoscope of Martian flowers jut from every crack and crevice. The fish are everywhere. Most brightly colored, impossibly blue or yellow or purple or black. They sparkle in the dappled sunlight, dash in and out of the coral. Green Parrot fish, Queen Triggerfish, French Angelfish, Stoplight Parrotfish, Blue Wrasse, Yellow Tail Damsel, Blue Tangs and Fairy Basslets. Most nibble away at the coral, some glide up for a closer look at the visitors. The curious ones come face to face briefly then squirt away. There’s so much motion yet this aquarium is silent. I hold my breath and float hoping to hear marine noise but it’s only the lapping of water over my head.

That school of Gray Snappers passes in front of me and now we’re briefly surrounded by Yellow Tail Snappers, hundreds of fish rush past on some unseen errand.

We swim to the next field of coral. If the first one was the size of a car, this one is a used car lot. Some of the cars come to a point and appear to scrape the surface of the water while others are bumps upon bumps.  All those bumps and spikes are teeming with fish. Tiny ones so colorful and darty, they fidget to and fro like Bob Ross’s paintbrush. A dash of yellow here, and splotch of green there and some happy little fish take shape. Rayolando points out a familiar shape in the sand floor, with two fat eyeballs. A large Southern Stingray has buried itself in the sand but cannot conceal his identity. His eyeballs track us as we glide ten feet overhead.

Soon Rayolando points out a slumbering Nurse Shark, safely tucked into the coral. Six feet long and the color of café au lait, its long tail and fat snout poke out from beneath the jagged edges of the coral. While most sharks must move to push oxygen-laden water through its gills, Nurse sharks have muscles in their gills and can breathe while motionless.

“Such lazy sharks” He quips.

We’re swimming again until a tug on my fin and Rayolando points east. Near the surface is a Barracuda. Maybe five feet long, glimmering silver. Barracuda are muscular, purposeful, menacing. They have a knack for pointing into the current and holding station. They do not dart or fidget about. They move when necessary or when hungry. As we give it a wide berth it eases away. It’s a live torpedo with a grimacing warhead, in search of a fleshy target. Later Rayolando would recount his uncle’s shanked attempt to spear one. The Barracuda rocketed into his chest, took a quick bite then was gone. Hauled out of the bloody water and 27 stitches later, the uncle vowed never to hunt Barracuda again.

Another tug and another finger pointing to the sea floor.

“Flounder” I say to the sea. Maybe two feet in length with a hint of blue around the edges of its body. Like the ray this flat fish has buried himself in the sand and left an unmistakable silhouette. When we surface, Rayolando calls out “Peacock Flounder. They change color to blend in with their surroundings.”

At the edge of more coral bumps are Parrotfish, three varieties. Green, Blue, and Stoplight. I’ve seen Parrotfish before, in the Bahamas and Mexico. The Stoplight, though. Wow. Its scales glimmer individually, like traffic lights. As the fish slips through the water, each scale glimmers and flashes, undersea starlight. Some saltwater fish are all born as females, that’s Parrotfish. As they mature, so do their colors. Early on they’re dark brown with white spots then grow into a checkered pattern of dark-brown and white scales, bright red fins and tail. At this stage they’re mature females.  After this point they’ll morph into a bi-colored male with sparkling bluish green scales and a large yellow spot above its gills, that’s the Stoplight. Eventually the now male fish will age into spectacular greens, yellows, and blues. And as we’re swimming over this group of Parrotfish we’re seeing Stoplights in various ages so they’re showing a huge variety of color and texture. Streaks of sunlight reach out and as the Stoplights glide in and out of the coral, they catch the light, sparkle and shimmer like a disco-ball from the 1980s. It is a mesmerizing scene.

I turn to Amy to give a thumbs up and… Oh Shit! Five feet away the Barracuda is looking right at me, showing his teeth in a watery growl. His lips part, his teeth flash, his dark eyes stare straight ahead. I kick hard, flip over and he grimaces again as a dog would to protect his territory. I catch up to Rayolando whom offers some advice.

“Don’t get too close and don’t try to touch him.”

Soon we’re over a small group of conch. Snails of the sea that move at a literal snail’s pace. Rayolando dives down and brings one up. His enthusiasm and knowledge of sea life is infectious, and he bursts with pride when describing Belize’s flora and fauna. He handles the conch gracefully, describes its life cycle, marvels at the smooth, luxurious texture on the shell’s interior and hopes the conch of Belize do not end up as Florida’s or those in the Bahamas, which are near extinction. Conch are easy prey for even the worst swimmers, and menus on Ambergris Caye are sprinkled with soups, salad, and fritters bearing their name.

A large ray glides over the conch with another fish in lockstep just above him. It’s a Parrotfish, hoping to catch a morsel of food when the ray finds something to eat. The ray flies past. Only the center of his body is still, the rest is undulating in a smooth liquid flow, as a radio wave would on an oscilloscope. Rays prefer to lie buried in the sand and don’t move often. We’re lucky to watch this one swim beneath us.

We’re nearing the boat and Rayolando takes us a bit south towards a grassy area in search of a sea turtle. The Marine Warden had mentioned one was in the area and Amy would like nothing better than to see an adult turtle. Rayolando obliges and we swim over the grass bed for the better part of fifteen minutes but no luck.

This isn’t a zoo so there’s no guarantees to spy a certain animal. And we’ve had an absolutely stunning 90 minutes in the water. Rayolando points to the boat some 100 yards away and finally I can get some exercise. My cyclist’s legs stretch out and I paddle hard, briefly imaging I’m chasing that damn Barracuda. At the boat, I spit out a bit of salt water, hand my gear to Rayolando then help Amy in.  I take one more dive into the salty water, immersing myself in its energy then pull myself into the boat.

If you’re new to this website, you’re reading the year-long adventures of John & Amy Malik in Belize, Central America. We’re professional chefs, restaurant owners, food & travel writers, adventurers, experienced tent campers, and hikers. We prefer authentic street food over a steakhouse, craft beer over traditional lager, a glass of Spanish Garnacha over California Merlot. Should you feel so inclined, please share this essay with someone you’d take on a rustic adventure, and sign up for our next dispatch from Belize. Just click here.