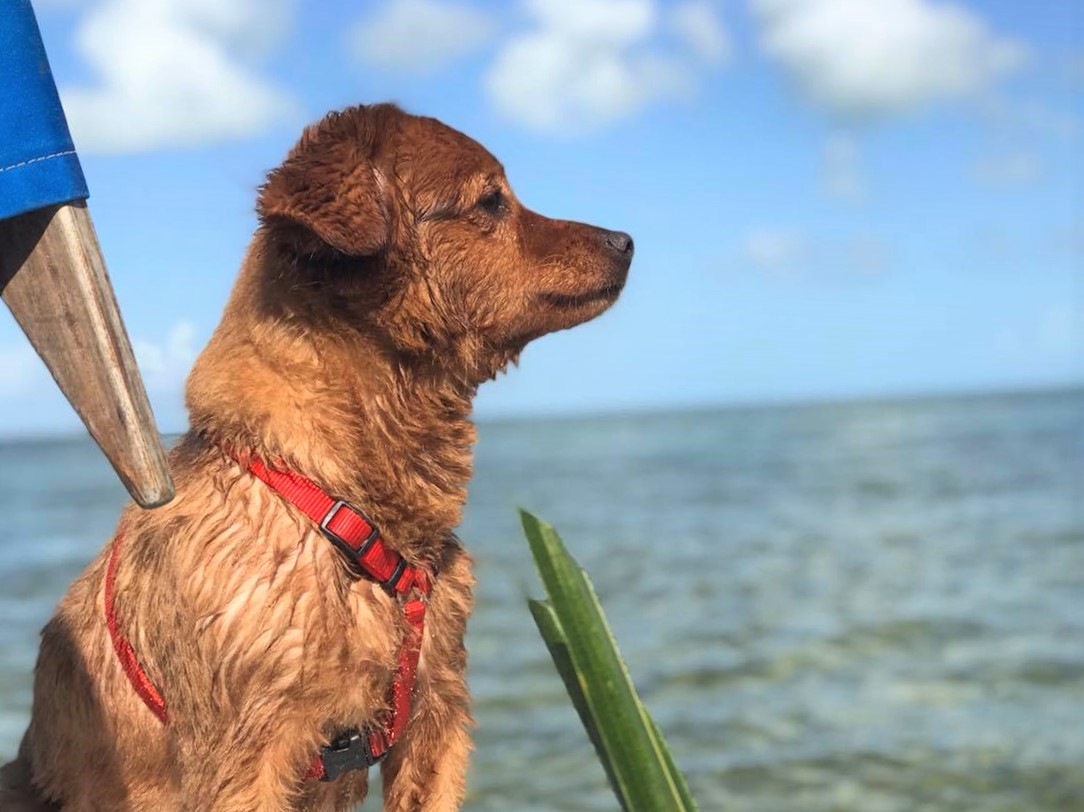 The “beach” here in San Pedro, Ambergris Caye is somewhat illusory. While most of the beach is public, the combination of sea walls, jagged shoreline, construction projects, and scattered bits of rocky terrain create a beach-ish puzzle. A walk on the beach in San Pedro means trotting over various obstacles, some natural and some not. Back home our favorite beaches offer up smooth, sandy thoroughfares often fifty plus yards wide. I can remember my beach runs back home where I passed tents, sunbathers, a guitar player, kids on wake boards, and never having to break stride.

Good times there, until one gets hungry.  Most food at or near an American beach isn’t fit for my dog. Feel free to challenge that.

This past Saturday morning we took a bumpy drive (heck even our shortest drives are bumpy) to the north end of Ambergris Caye and the much written about Secret Beach. My guess is years ago this beach was only accessible via boat, hence the “Secret” part, and since then there’s been a lot of development via American real estate speculators.

Having been turned back twice previously courtesy flooded roads, it was a relief to make it on this occasion. I wasn’t especially interested in this trip and we can thank the marketing of Maruba Beach Club. Their signage promises pretty young women capable of keeping a secret. And to me that meant bad food, cheap drinks, poor service. Our morning would consist of a thirty-minute ride across rough roads in a poorly sprung golf cart to a questionable destination. And was I ever wrong.

The first person we met was Ricky from Maruba Beach Klub.

“Hey folks! Good morning and welcome to Secret Beach. Is this your first time here?”

The accent of a native Belizian is quite lovely. Take the word “noun”. In the states, most of us would say “nown.”  Here in Belize the average* resident would pronounce it “now…nn” and each letter would be drawn out as if they were singing this one word. The result is words such as “pronounce” practically drift away on treble clefs. A conversation with a native can be as satisfying as listening to one’s favorite song. Maruba Klub’s Ricky was offering us great hospitality, with four chords. He gave us an arm’s length visual tour of the beach, provided a short description of the four establishments sharing the beach, asked our names and our dog’s and promised a great meal should we return. And when we returned thirty minutes later, he called out: “Mr. John, Miss Amy! Welcome back and may I bring you a menu?”

Well yes. Because a few minutes earlier my wife purchased a Sky Juice. On our trips to the Bahamas we were intrigued by the Sky Juice cocktail. It was nothing more than a fresh coconut with a shot or two of gin and a straw. Simple and tropical, versions of which are sold in coconut treed nations the world over. Yet somehow, we never found one at the right time. You can see this one coming, correct? One of Ricky’s competitors offered Amy a fresh coconut cocktail and instead of her asking “hhhmmm, what time is it?”  (it wasn’t quite 10:00 am) or “What’s in it?” she asked, “Yes, please.”

Good thing I was driving.

One can measure coconut water’s ability to slow alcohol absorption with a sundial. And two shots of rum is still two shots of rum. So, after our swim, which provided our dogs a chance to humiliate us, we returned to Ricky’s care. A plate of fry jacks, a bottle of water, and an order of Huevos Rancheros showed up ten minutes after ordering and damn, this is what island food should look like and taste like.

You’ve probably had a New Orleans style beignet, correct? Or a yeast risen pizza? Fry Jacks are both, and neither. Why Jacks? Why aren’t they Bobs or Jimmys? I’m hoping a reader will offer up a proper story as we’ve heard differing opinions as to why they’re “Jacks” and I doubted both.

Two of the Jacks we’ve had were round, fairly neutral, yeast risen doughs like pizza dough. Both deep fried, one seasoned with cinnamon sugar and honey, and one was savory, with grilled chicken, beans, and hot sauce to form a Belizian style Sub sandwich. My least favorite was a baking powder dough filled with a scramble of eggs, cheese, bacon, potatoes, tomatoes, and herbs. An omelet inside pancake batter, deep fried, sliced in half. Oof!

Chef Marlaine of Maruba offered up six small tropical beignets served with a dish of local butter and honey. And they were perfect. Light and airy, warm enough to melt butter and my cynical heart. Her Huevos Rancheros were miniature tostadas with all those delicious Ranchero elements. Here were clever and careful use of local ingredients used to create a delicious and photogenic meal. Two nights before we’d dined at one of San Pedro’s heralded brasseries where we expected this level of cuisine, only to be disappointed and relieved of three times the money of Maruba.

And the beach. Although not large by my previous standards, the water is clean and cool with the slight green and blue tint from phytoplankton. In other words, it’s a healthy beach. It’s not enough beach to go for a jog and it’s certainly pretty and clean. As we swam we were greeted by snappers, tangs, and small angelfish. There’s also a lovely view of the western Caribbean and Leonardo DiCaprio’s island. And those dogs of ours? The water at Secret Beach could not be more inviting. It has all the current of bath water. One couple had their two little ones in, and they were jumping and splashing about. Our two chasers of iguanas and eaters of raw beef, however, were petrified. We plopped them on one of Secret’s picnic tables and encouraged them to swim all of five yards in two feet of gentle, cool, clear water. You would’ve thought we were asking them to swim through a flaming river of rusty barbed wire into the arms of their vet and a year’s worth of vaccines. Years ago, Bonnie, our Jack Russell Terrier, would’ve comfortably swam to Leonardo’s island, peed on his favorite pair of Seersucker pants, then swam back in an hour. These two? Well, we still love them, they’re very good dogs and Leonardo’s wardrobe would be safe in their care.

Now granted our time at Secret Beach was during a lull in international tourism (thanks corona virus, no uppercase for you) and we were there at the aforementioned 10:00 am. Should you head to Secret Beach at 9:00 pm on a Saturday night and not get the same experience, don’t come complain to me.

*there isn’t an average Belizian

If you’re new to this website, you’re reading the year-long adventures of John & Amy Malik in Belize, Central America. We’re professional chefs, restaurant owners, food & travel writers, adventurers, experienced tent campers, and hikers. We prefer authentic street food over a steakhouse, craft beer over traditional lager, a glass of Spanish Garnacha over California Merlot. Should you feel so inclined, please share this essay with someone you’d take on a rustic adventure, and sign up for our next dispatch from Belize. Just click here.