At 7,000 feet, the jump master opened the door and offered me a thumbs up.  The air whooshed through the cabin, animating the nylon of my jumpsuit.  As the green patchwork gently retreated past the spinning props and whistling wingtips, I stood up, gripped the hand rail, and hesitated.

“John, I have a job I think you would be interested in, it’s a Food and Beverage Director at a wonderful resort hotel.  It’s in the Midwest but I think you’d love it.  Listen, before we go any further I want you to talk to your kids, talk to your family first.  Then let’s talk again on Tuesday because I don’t like to send candidates out of state unless they’ve taken everything into account.”

I would parachute out of an airplane tomorrow.  That is, if my wife would give me permission.  A few years ago she grew weary of meeting me at the ER, of cleaning the gravel out of my shoulder, of stitching my cuts and icing my bruises.

“Sweetheart, you really should learn how to slow down.”

I grew up in a time when boys were expected to get out of the house, to catch snakes and frogs, to fish and hunt.  We were supposed to challenge ourselves, to run barefoot, climb trees and take chances.  I still have an enormous sense of adventure and the desire to push myself.  And when that phone call came, I blurted out Yes!  And as I listened to her, I caught my own reflection in the glass of a family photograph.

Did I really need to jump out of this airplane?

For months I had been on the job hunt and it had slowly ground me down.  A chef that had spent almost six months on crutches was not what one would call a hot commodity.  I began to question myself and spent too much time in regret and pondering what-ifs.  One lousy 80-pound case of ground beef, a tiny scratch on my femur, an unappreciative employer and a knee that slowly lost stability had sidelined me for almost two years.  Months after the surgery I wondered not if I would be able to cook again but would I be able to run or go up and down stairs.  And finally I drew the interest of a talent scout in Chicago.  And she had one heck of a position she was looking to fill.  If it was just me, no family waiting for me to arrive safely back on the ground, I would have leapt out of that airplane, yelling with delight all the way down.  Yes I would have missed my town and friends but the adventure was calling.

Amy and I had a long discussion that weekend and decided that the timing just wasn’t right.  We had a lot of friends and contacts, we live in a great town and our kids, both teenagers, would most likely be heartbroken.  And what about my knee?  Would I be able to handle the stress of five or six consecutive 12 to 14 hour days?  Amy has invested a lot of time helping me get back in shape. Is this how I wanted to thank her?  Did we really have to start over in a new town, a new state, a new everything?  I don’t always know when to say “no” and that could have been my downfall.  If I had gone back to a hotel too early and a few weeks in had to relinquish my position; that could have destroyed me.  But I have a desire to be helpful, I love to make people smile and I really miss being part of a team that has its heart set on a common goal.  So what now?  If I say no to this, what would be waiting for me around the corner?  So I said another prayer and asked not for an answer, but a little bit of patience.

About two weeks later I was approached by a company that wanted to pay me real money to manage their social media.  Really.  And now here I am with a new career, a new company and new challenges. 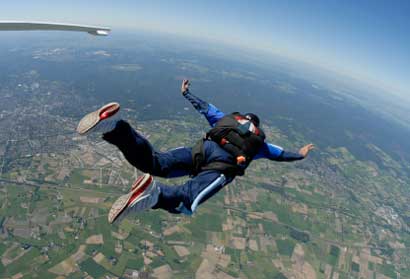 In many ways, I jumped out of that airplane months ago, I just hadn’t realized it.

Sorry, the comment form is closed at this time.