Let’s make this perfectly clear.  Eating the wrong wild mushroom can KILL you.  Not quickly like Clint Eastwood’s creepy Union soldier character in The Beguiled but over the course of a few painful weeks by destroying your liver.  So DO NOT read this then strut into your neighbor’s artificially bright Chem-Lawn yard, pluck ANYTHING out of the grass then pop it into your mouth because you read this post.  Got it?

So now that we have the legal stuff out of the way.  A follower on Twitter recently asked me about foraging, something I learned to do in…well, come to think of it, it’s something I’ve done since I can remember.  In south Louisiana I grew up with kids that hunted, fished and foraged constantly.  However joining the Boy Scouts really opened my eyes to a world of possibilities and it was at the age of 12 that I first harvested cat tails, ate willow tree bark to relieve pain and learned how to tell poisonous snakes from harmless ones.  At a summer camp, one of our leaders also showed a few of us how to identify wild mushrooms and me being interested in food at an early age, well of course I tagged along.  So many years later I still get a kick out of finding lunch.  In the upstate of South Carolina, I’ve found and eaten Chanterelles, Morels, Oysters, Lobster and King Boletes (cepes or porcini) mushrooms.  Yesterday I took the dog for a walk and found a pile of Eastern Puffballs in a field so when I got home I grabbed some scissors and a bowl.  Now this is very important.  You DO NOT want to pluck ANYTHING out of a fertilized or chemically treated yard.  Do I need to say that again?

If you want to start doing this yourself, the Audobon Field Guides are a good place to start, they even have apps for your phones.  You may also find classes through your State Park system, I’ve taken several great outdoor classes from State Parks in SC, NC, TN and Virginia. 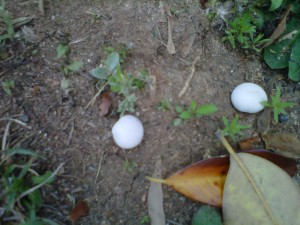 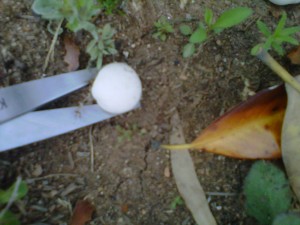 These puffballs were small. Harvest mushrooms by snipping or cutting above the ground line, that way the root system (mycelium) stays intact. Puffballs should be brilliant, almost bleach white for them to be edible. 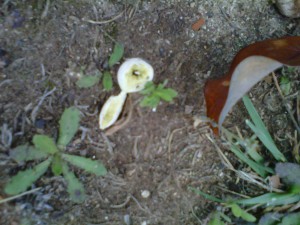 This was was a bit soft, as soon as I touched I knew it was either past its prime or inedible. Edible Puffballs should be brilliant white all the way through and have a spongy yet firm texture, much like a stay-puft marshmallow. 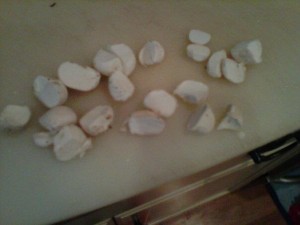 Once I got my mushrooms home, I sliced all of them in half to make a positive ID. They look like little marshmallows, right? My Blackberry doesn't take the sharpest photos (upgrade coming soon) but trust me, these guys are pure white throughout. 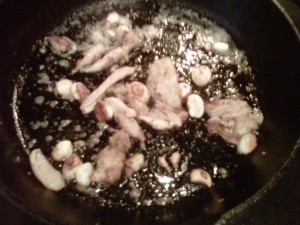 Then I took a left-over fried chicken thigh, pulled the meat then sauteed that with my mushrooms, some salt, pepper and butter and fresh thyme 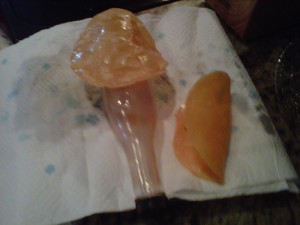 I fried a couple of corn tortillas, as soon as they came out of the oil, I laid them across an empty vinegar bottle to shape them 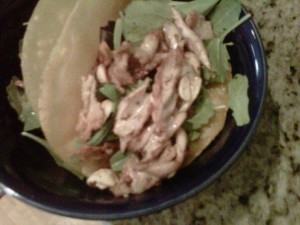 Add a bit of local arugula, some Crystal hot sauce and I had a pretty good lunch. Delicious 😉