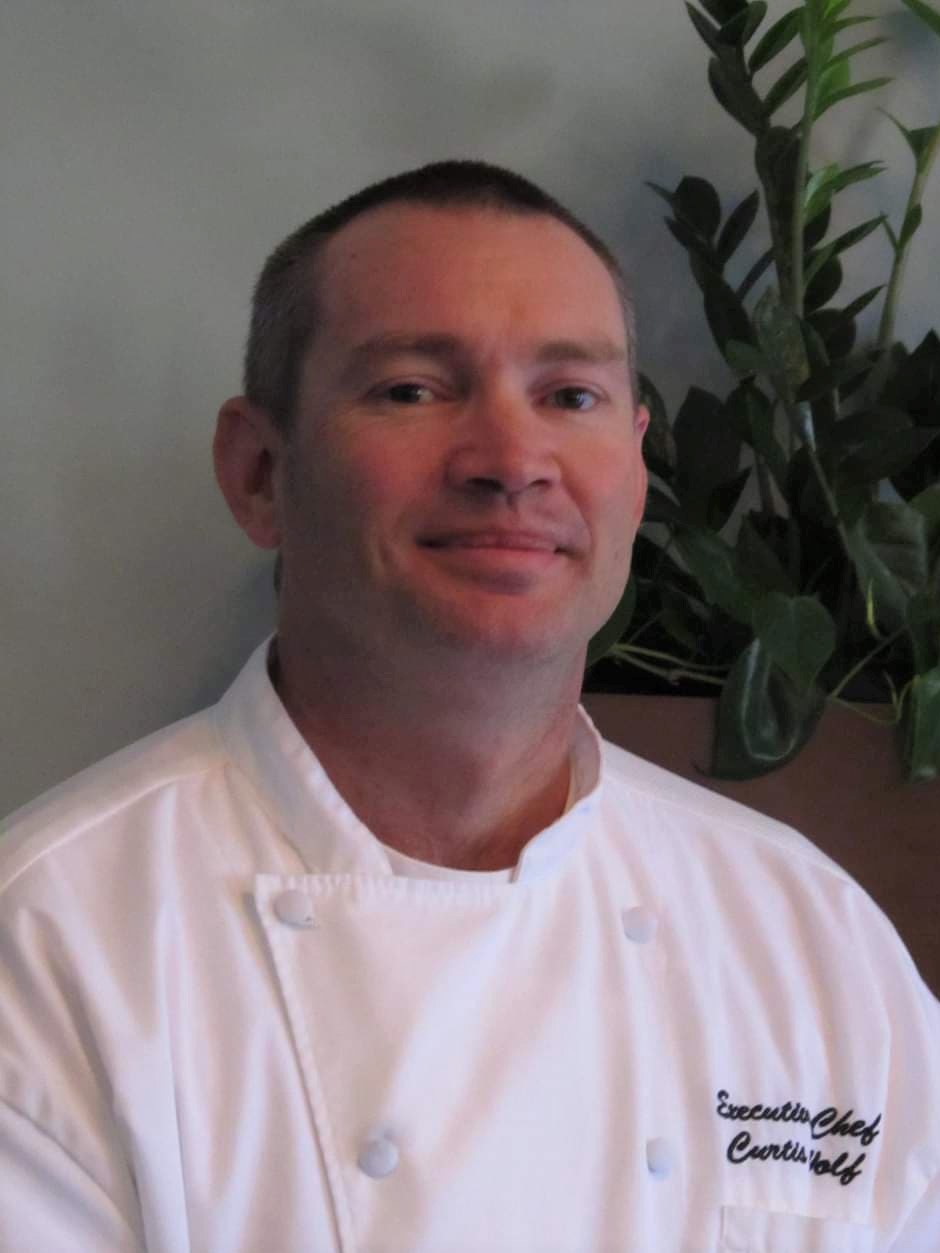 20 Feb On the Passing of Chef Curtis Wolf

At 6:00 am this morning I learned a good friend of mine had passed away.  And I’m heartbroken. For 17 years Curtis Wolf was the executive chef of a luxurious hotel in downtown Greenville. In my world chefs are prone to jump back and forth between jobs searching for just the right circumstances, the proper combination of control, management, budget, staffing, and salary. Many of us are a tattooed Goldilocks, looking for the just-right bed to solidify our hierarchal position in our chosen towns. There’s a certain gratification in becoming a celebrity chef, whether it’s locally, regionally, or on a bigger stage. Curtis wasn’t interested in any of that. He was all about the customer, the experience, the teaching opportunity he had in front of him. He loved to share technique, lessons, and experiences. And discipline? He had it in spades.  A cyclist, a runner, a duathlon competitor. Where the hell did he find the time to do all that?

Running the kitchen of a large hotel isn’t for the faint of heart. In order to be successful, one must be knowledgeable, professional, and completely organized to the point of color-coding elements of your private life. One cannot live a sloppy, disorganized life outside of work and expect to walk into work and suddenly become organized and disciplined. You will not be successful if you do not bring a significant level of organization into every facet of your life. Although I never visited Curtis at home, I suspect he brought a high level of organization to his personal life.

Years ago, when I suffered through a career crisis, he was there for me. He coached me, encouraged me, guided me, checked up on me through a tough time in my personal and professional life. And later when he went through his first battle with cancer, I snuck some chicken noodle soup into his hospital room. I made the noodles for the soup. He bit into them, and he knew I made the noodles. He didn’t question me about the noodles, he just enjoyed them for what they were. He knew I wouldn’t dream of bringing him, a chef of his caliber, one I respected immensely, soup made with boxed noodles. And I wasn’t expecting him to flatter me with handmade noodle compliments. I’d come there to say thank you, I respect you, I love you and I want you to get better. So naturally I made the noodles.

Recently we had breakfast here in Belize at a small coffee house on our island. The lady that runs it is new to the restaurant business. She didn’t tell me, I can see it a mile away, she wears her inexperience like a sheriff wears a silver star. She does, however, have respectable food and good coffee. One day while enjoying an avocado, egg, cheese, and tomato sandwich we asked her about the sandwich’s bread. Where did it come from?

One would’ve thought we’d asked her how she lost her virginity.  When she recovered from my daringness, she sputtered out that a lady on the island made it to her specifications and just for her, no one else. The baker had an agreement with this owner. This loaf was hers to sell and no one else’s, it wasn’t for sale anywhere else on the island.

I laughed out loud, almost under my breath but not quite, and I’m sorry I did that.

Her bread was okay, not a great loaf by any stretch of an artisan baker’s imagination, yet it was good for a small island in Central America. The conversation we had felt like she was out to protect what we would consider back home a fairly pedestrian avocado sandwich. Long sigh…

Good thing she wasn’t a physician. Hiding knowledge, hiding the truth, preventing one of her team members from becoming better at their profession doesn’t allow for growth and is incredibly short-sighted.

A true leader makes their mark by sharing their knowledge, encouraging their team to learn, to study, to be better daily. That’s how we live on after we are gone. We make an impact by sharing our knowledge, our trade craft, our secrets with those that are interested, the ones that will follow behind us and take over after our hands have failed us. And that’s where many fall short on their quest for enlightenment, by forgetting to ask, “where can we be better tomorrow?” If you want your operation, your team, your business to be better tomorrow than you’d best be asking that question at the end of every day. Ask yourself, your team, your customers. When those answers make sense then go about implementing them. When we demand secrecy, and obedience to mediocrity all we’re doing is stifling innovation and creativity.

A few days later, after learning of Curtis’ passing, I was reading over the praise for his leadership and many of the comments were left by former cooks or team members of his.

“Curtis was an extraordinary man, a great chef and an amazing teacher. He enjoyed sharing his craft with so many.”

“Chef never hesitated to share his knowledge – thank you and truly it was a privilege to work with the best for several years.”

When I learned of Curtis’s passing, I was sick with remorse. I wanted to be home, in my own kitchen, making him chicken noodle soup and knowing he’d soon be back at work in that glorious landmark of our town, making our visitors and wedding guests happy, back where he belongs. I don’t want to read about the funeral proceedings, I want to cook for him. So, I did the only thing I could think of to honor him, I made a loaf of sourdough bread, by hand. I measured out the flour and my sourdough starter with a small coffee cup, the salt with my fingers, the water I added in small increments while I was kneading the dough.

As I went through the thirty-minute process I saw Curtis standing near me and he was paying attention, learning, asking about the steps of creating a starter from scratch. I stepped aside and let him get his hands into the dough, told him what it should feel like as the strands of gluten began to elongate and strengthen, to create the protein matrix that would form the backbone of this loaf. I’d mention to him the oldest form of written language modern anthropologists are aware of is a Sumerian bread and beer recipe that is roughly 3500 years old. He’d respond with “Yeah of course, they knew the water could kill you so it’d have to be purified through fermentation. And that’s basically the first recipe for beer.”

We would share a laugh and spend a few minutes wondering what sort of Sumerian would’ve figured that out. He or she likely would’ve been curious, someone that spent a lot of time cooking and cleaning and thinking about how they could do something better.

“Definitely a chef, right buddy? And when they had the technique for making the water safe, they were adamant their technique would be shared with others. But how?”

“Well, someone had to step up and invent a method of sharing that technique so therefore, language was born.”

And we’d laugh out loud and agree that written language was born out of necessity because an ancient chef wanted to share the knowledge of purifying the water and baking bread.

This week I’ll invite a young cook over, a kid named Jose who asked me to show him how to be better. And I’ll walk him through sourdough bread, the whole process, and I’ll give him the remainder of my starter. And when we’re done, I’ll ask him to share the knowledge when he feels comfortable with his bread baking skills. Because that’s the best way for me to remember and honor my friend, Chef Curtis Wolf.

Chef Ken Talbott’s words on Curtis’s passing: Rest easy Chef, we will serve you from here.