09 May Life, and Death, on Tin Roof Farm

When we lived in the suburbs, I really enjoyed cutting the grass and maintaining the landscaping. Our previous homes in Greenville had traditional lawns. One big square of grass in the front, and one big rectangle in the back, each bordered by bushes or shrubs with the occasional tree poking up in the middle of the lawn. When I cut the grass, I followed the same path, every time. My path was designed to provide the most amount of coverage in the least amount of time. I taught my son the same technique; start on the perimeter, make 90 degree corners, and work your way in and you’ll end up with a nice tidy cut and an attractive lawn.  Neat. Orderly. Routine.

We had cats and dogs and most of them lived a long, happy life. If they got sick, they let us know. They whimpered, looked at you with sad eyes, shunned their breakfast or sat in the corner until you took pity on them and got them to the vet.

And then we bought our three-acre farm and on our two-year anniversary of living here, it’s time to share some observations.

There is nothing orderly about it.

Sure we try, but even cutting the grass can be a challenge. There are no straight lines or 90 degree corners to be had, anywhere. With a dozen or more chickens, two turkeys, two dogs, and fifty thousand honey bees, one’s path with with a rumbling Craftsman mower is constantly weaving. Honey bees are surprisingly docile, until you get too close with a fast moving machine that sends earthquakes through their home. What defines too close? That changes with the weather. So I let the grass have its way ten to fifteen feet from their hives. Because honey bees have only one way of expressing their displeasure with humans. And it hurts. Each hive has a queen and she lays upwards of 1,500 eggs per day. One thousand and five hundred. The typical honey bee only lives for 30 days or so. And when they die their bodies are shoved out of the hive by healthy bees. That’s usually the first thing the hive does in the morning. There’s no fanfare or ceremony, just a quick burial at land. 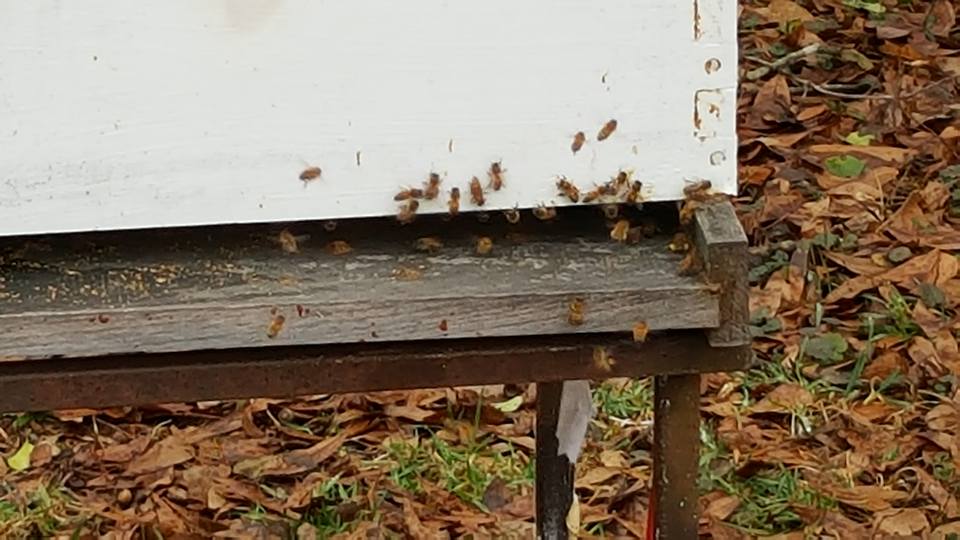 Our bees bringing home the pollen

Remember how much you hate clover? Most of our suburban friends went nuts with the herbicides because for some reason, this stuff makes an ugly lawn. Our bees, however, love it because it produces a crazy amount of pollen per square yard. So I leave patches of it here and there. Our pasture never looks neatly cut.

Clover? The honey bees love this so I don’t mow it all down at the same time. Leave a patch, cut a patch.

When we started looking for farm animals, several real farmer friends of ours warned us not to name our animals or treat them as pets. Goats, chickens, turkeys and the like, should they get sick, “have little will to live.” Unlike your Springer Spaniel, they won’t let you know if they’re sick, they’ll just waddle into a corner and pass away.  Another farmer bluntly warned us that life on a farm is cheap. Animals will disappear, wander off, or die, at the drop of a hat. 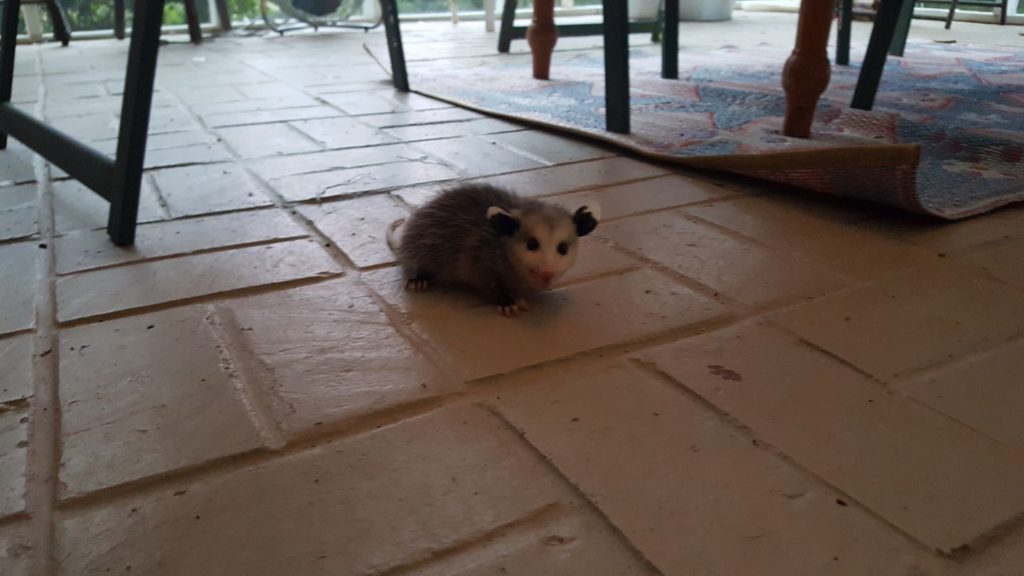 This little guy showed up one morning. Even when they’re babies, Possums aren’t very friendly. We named this guy Bitey McBitey then put him outside where Mom came looking for him.

A few months after we moved in, we got our first chickens. A variety pack. Another few months went by and my bride found some Lavendar Aracaunas. Beautiful chickens that were very friendly. It was normal for them to fly onto my shoulder, beg for a treat, or follow us around. 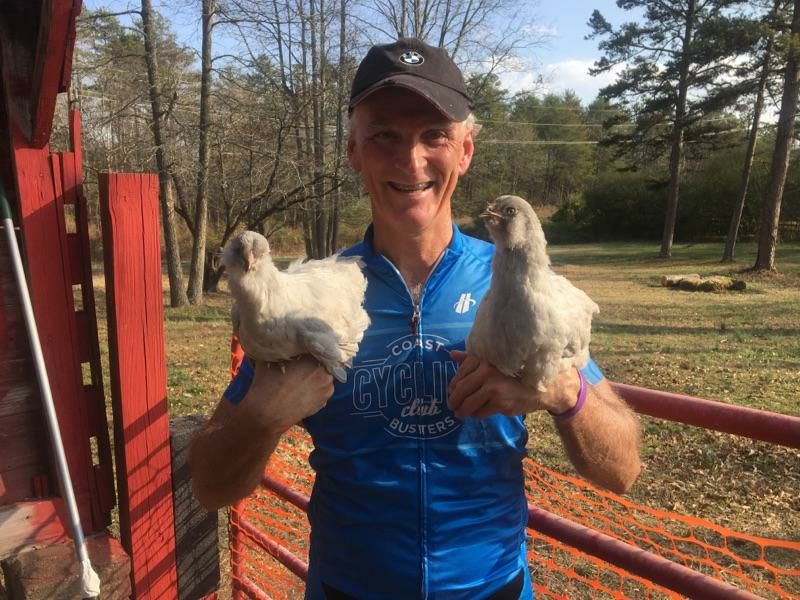 Our Lavendar Aacaunas in happier times.

We were so enamored with them, we named them. When an invitation came to discuss backyard chickens on a local TV program, I brought these two along and they were willing guests. Four weeks later they both died within a few days of one another. They were probably egg-bound.

Imagine a reproductive system capable of producing one gorgeous, calcium-covered egg every day; now imagine that system working perfectly every time, every day, in every chicken. It just doesn’t happen. When a young chicken is egg bound, it’s usually fatal. The egg gets stuck, another egg is being created and begins pushing on the stuck egg and soon binds up blood vessels. We followed the prescription and soaked her in a warm, epson-salt studded bath but it was no use. Fortunately we didn’t really treat them as pets so their loss didn’t hurt that much.

Hen on her roost as the sun starts to set.

We’ve lost maybe six chickens and four chicks. The chickens just turn up dead. One day they’re running around minding their own business and the next morning they’re dead in the barn. No sign of disease or injury, they just give up and die. When a chicken dies, the other hens will peck at her in an insulting manner. Almost as if they’re mocking her.

When the little chicks die, they just disappear. Maybe a hawk or a snake patiently waiting near the tall grass.

Dogs are incredibly social. If you brought your dog over the first thing our Otis would do is invite the visitor to play. Chickens and turkeys are very cliquish. They stick to their own little group and when you introduce new chickens to your yard, they keep their distance from each other. The hens that have raised chicks teach them to keep clear of us, of snakes, of other potential dangers as well as where to find the best bugs. 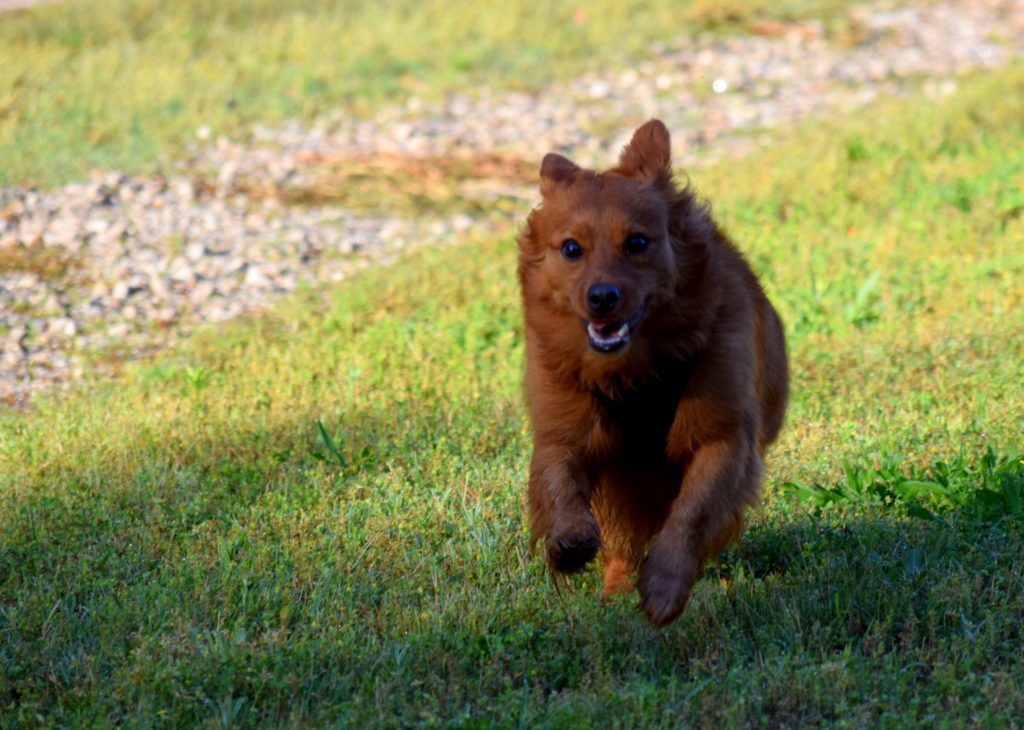 Last summer we bought five turkeys, four males, one female. Heritage breed, Naragansett Turkeys. We wanted a real turkey for Thanksgiving and decided to keep a male and female so we could raise a half dozen or so a year. After Thanksgiving our solo male became more aggressive and by Spring he decided I had to die. It was nothing personal, he just saw me as a threat to his yard supremacy. It’s quite unnerving to have a 40 pound bird with T-Rex claws come at you with all his might, and after losing five hard fought battles to me, he’s learned to keep his distance. He still wants me dead so I keep an eye on him when he’s near. My death is all that interests him. He certainly doesn’t want to be a Dad and our Hen Turkey hasn’t gone broody, even though she’s laying eggs.

Our Tom and Hen with a few chickens.

Not surprising because our chickens rarely sit on their eggs. Only when a hen goes broody do they sit on eggs. What triggers “broody”? We’d love to know because it’s a great mystery. Maybe something to do with the size of the flock? Or maybe a desire to raise chicks, to be a Mom, to bring life into their world.

So if we wanted to hatch baby turkeys, we needed an incubator and would have to play Mom for the first 30 days or so.  And that we did. Of the two that hatched, one of them died in a few days. Our healthy baby turkey stayed inside for about three weeks. Remember how cold the first weeks of April were? Turkey poults (that’s what baby turkeys are called) need to stay dry and very warm, 90 degrees warm. So our little guy stayed inside for several weeks and kept close to the heat lamp. As her feathers filled out, she was able to spend more time outside. However, she was a bird without a family and little ones like this need a Mom to teach them the dangers of the outdoors. There’s circling hawks and snarling crows, snakes waiting patiently in the grass and ill-mannered hens that think nothing of pecking at strange birds that aren’t their own.

So we were careful of her time outside and learned a lot about baby turkeys. We noticed about two dozen calls, everything from “where is everyone” to “this food is delicious” and they do it all without moving their lips. Unlike our baby chickens, they’re very affectionate. However, we knew better to name her and we kept her at a distance because we’d been told that life on a farm is cheap. 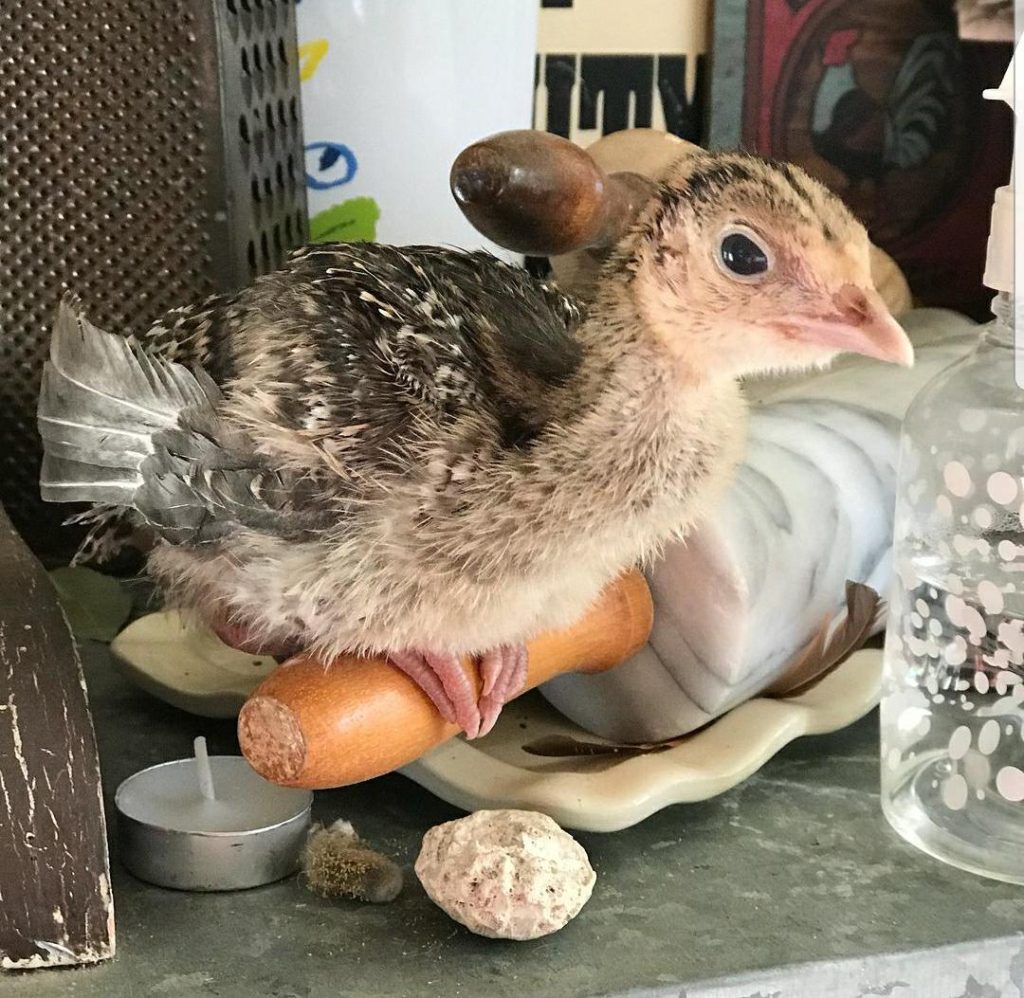 Turkeys prefer to roost instead of sitting.

She would follow us across the yard or the house and she loved to climb inside the fur of Otis and purr happily. In a proper turkey life, she should’ve been tucked under the wing of her Mom so that’s why she loved to burrow into Otis’ fur, or our armpit. If she was on your shoulder, she might mistake an eyelash for something yummy so it was best to close your eyes. We tried to introduce her to Mama turkey but unfortunately Mama didn’t want anything to do with her, and she needed someone to protect her, to look after her.

Once the warm air decided to stick around, we moved her outside. It’s impossible to potty train a turkey and her droppings were growing by the minute. However, we loved the pitter patter of her feet as she ran down the hallway, the high pitched purr she made when we gave her a little bacon fat, the cartoonish squeak she made when Otis licked her, or the low grumble she made when she was hungry. When company came she was the life of the party. She jumped into laps, tugged on shoe laces, and fluttered into hearts.

They often napped together

We kept an eye on her and made sure she stayed out of trouble. And we were proud of ourselves for not naming her, not getting too close to our farm animal, and not enjoying her company too much. We tried our best, but we’re only human. 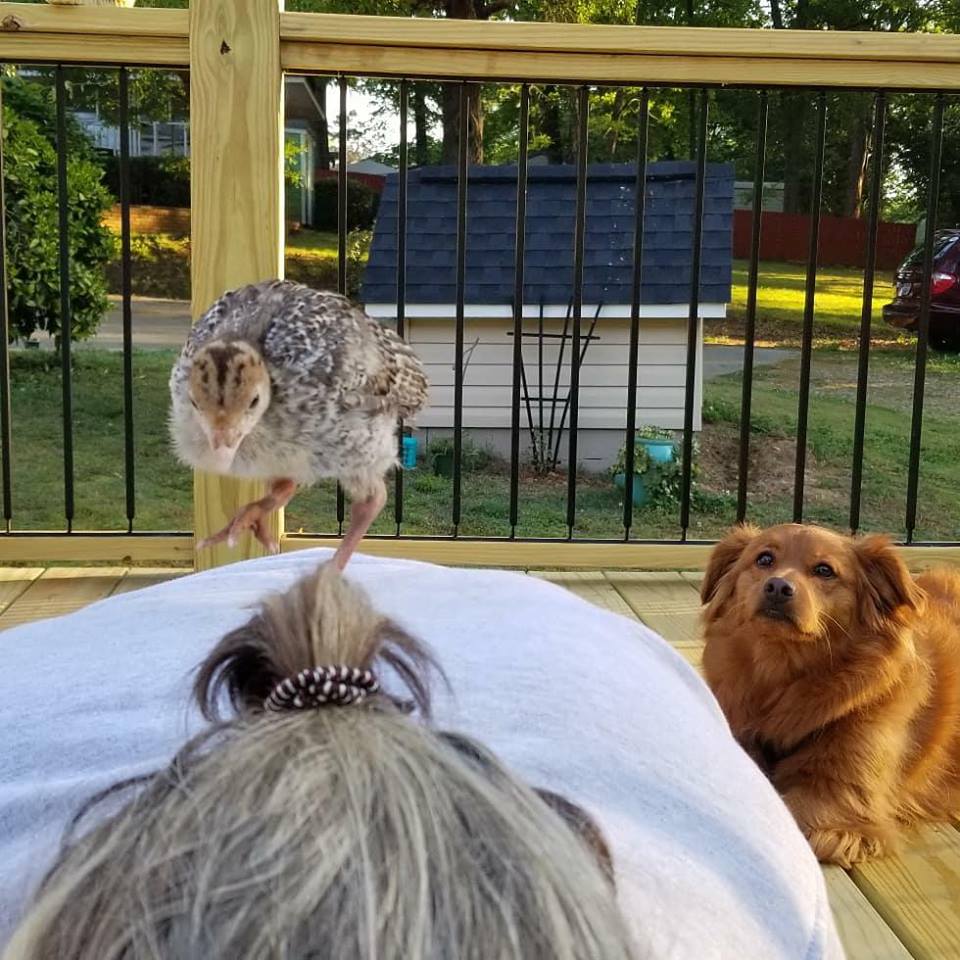 It was a sunny afternoon and our chickens and turkeys sounded happy and I was in the house with all the windows open. No calls of alarm from the other birds, no barks from Otis, no squeak from our little turkey, she was just gone.

And that’s why we didn’t name her or grow too close to her. Because on a farm there is very little routine, very little order, and these farm animals have a way of just quietly slipping away.