The Beechcraft King Air 200 has shut down; the passengers disembarked and as the pilots are walking away I whisper into my 4-year-old son’s ear “Wave at the pilots”.  It works like a charm.  One of the pilots walks over to us and asks my son.“Would you like to see the inside of this airplane?”  “Yesssirr” he shouts!  In we go.  My son, Tudor, goes for the left seat.  I naturally have my camera ready and I snap another photo for his bedroom collection.  Now you may think that there is some coercion on my part and you may be right, but it’s all part of my plan.

Airplanes have always fascinated me.  Growing up, I really wanted to fly F-4’s for the Navy.   I watched the Blue Angels every year at Belle Chasse NAS and I just knew that one day I would be signing autographs for all those adoring kids.  I even learned how to fly when I was in high school.  I was a good flier, able to make the Piper Tomahawks and Cessna 152’s perform soft landings and smooth turns.  17 years old and I felt like Ira Kepford, prowling for Zeros in the Pacific.  There was only one small problem with my piloting skills; I was a lousy navigator.  On both of my cross-countries, I got myself so lost that only a town-inscribed water tower and a low pass saved me.  While in college I actually had several meetings with Navy recruiters.  While listening to these recruiters and watching their films, I could picture myself hopelessly lost over the Pacific, with the back seat weapons officer hollering “The carrier’s east!  Don’t you know which way is east?”  I eventually became a Chef but I’m still fascinated by airplanes.

Fast-forward about 20 years.  One day I decided to bring my then three-year-old son to the Greenville Downtown Airport just to watch airplanes.  We have a great general aviation airport in the center of town with a four-foot high wall separating the parking lot from the tarmac.  The first day that Tudor and I are on the wall, the pilot of a Citation II walks right up to us and asks if my little boy would like to go inside.  “Hell yeah, I would!…uh, I mean yes, of course, right son?”   While my son was trying to twist the yoke off of the panel, the pilot entertained my questions regarding rotation speed and maximum thrust.   As I was driving home I was struck by the fact that this never would have happened had I been by myself or with someone my own age.   It’s definitely the kid.  Admit it, most of us are only too happy to show off their “office” to a starry-eyed child expressing interest and pilots are no exception.   Nevertheless, it took several more experiments before I could prove my theory.  So the next week, there we were on the wall waving at pilots and sure enough we get invited into a Beech Jet, a couple of weeks later we go into a Cessna 421 and a few weeks after that, during a trip to Louisville, Kentucky, he got to sit in an air-ambulance Dauphin helicopter flown by an ex-Apache pilot.  Much to my wife’s dismay, my son recounted the story of Pilot Glen & Nurse Patsy’s Dauphin over and over, all the way home, all the while hand-flying the toy helicopter I bought him before we left Louisville.   The plan came to make sense to me when we were invited into a Canadair Challenger.  What a fine machine that was and so much bigger than anything he had previously been inside.  The day after we went into the Challenger my son was looking at photos of the Space Shuttle and asked me if one day we could go see the Shuttle take-off. “What a great idea, of course we can.”  I replied.  “Will the astronauts let me sit in the cockpit?” he asked.  “Hhhmmm” I thought, “I wonder if we could pull off that one.”

“You’re giving him a false sense of reality,” my wife complained.

“No I’m not, it’s all part of my plan.”  It was at this point that I had to confess that I was trying to mold our son into a Blue Angel or a Shuttle Commander.   And she was critical to all of this because she possesses the navigational skills so sorely lacking in me.   She definitely knows which way is east.

“You know it wouldn’t hurt to bring him to an art museum once in a while.”  She said.

“I’ve got no problem with that.  Why don’t you see if he can find the museum by dead reckoning?”

So I truly believe that I can work all of this to my, uh, his advantage.   If the child-rearing books I have read are true and the early years really are the formative ones, my son is well on his way to becoming a Blue Angel or a Shuttle pilot, circa 2027.  I wonder if Blue Angel parents ever get asked for autographs or better yet, maybe the dad’s of Shuttle Commanders get to sit in the cockpit of Columbia. 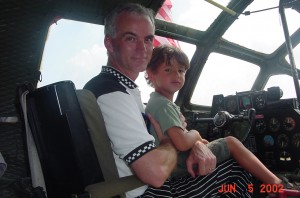