Friday June 1st is National Doughnut Day so why not celebrate this quirky event by making your own doughnuts from scratch?  It’s not that hard but you will have to stand over a half gallon of 325 degree oil.  If you can exercise a little caution with the oil and promise not to fry these things when you’re hungover or have little ones near the stove, give it a try.  First you need a basic recipe and lucky for you:

In the bowl of a stand mixer add the yeast, sugar and warm milk.  Whisk together.

In a separate bowl sift the flour, salt and malted milk powder.  Place the egg yolks in a small bowl.  Using a sharp paring knife and a cutting board split the vanilla beans in half lengthwise then carefully scrape the fleshy interior of the beans into the egg yolks.

When the yeast mixture has a frothy top to it (about 10 to 15 minutes) add the egg yolks and vanilla bean, whisk together then add the flour mixture, place the bowl onto the stand mixer, attach the dough hook then turn to low speed and allow the ingredients to mix until they have formed a smooth glossy ball.  This should take about four to five minutes.  If the dough is sticky and does not form a smooth ball, it may be necessary to add a pinch more flour.

Remove the bowl from the mixer.  Cover with plastic then leave the dough at room temperature for at least thirty minutes or ideally allow the dough to sit overnight in the refrigerator.

Lightly dust a clean counter with flour.  Place the doughnut dough onto the counter then using a rolling pin, gently roll the dough to about a half inch thickness.  Make a small mound of flour, press the doughnut cutter into the mound of flour, tap out the excess then press the cutter into the dough.  Place the doughnuts onto a clean sheet pan that has been sprayed with Pam.  After all doughnuts and holes are on the sheet pan cover with a clean cloth and allow to proof for about 15 to 20 minutes at room temperature.  The doughnuts should be the consistency of a large marshmallow when they are ready for the oil.

Make the glaze.  Place coffee, butter and a pinch of salt in a sauce pan over high heat and whisk while bringing to a boil.  Whisk in the powdered sugar and continue whisking until a smooth paste has formed.  Remove from heat, add chocolate and continue whisking until a smooth glaze has formed.  Add vanilla bean pods and if you like cinnamon, a dash of cinnamon.  Place glaze in a wide bowl and set aside.

Heat the oil to 325 degrees Fahrenheit.  If the oil is too hot, the sugar in the dough will burn before the doughnuts actually cook so use a candy or high heat thermometer to monitor the temperature of the oil.  Carefully place the doughnuts into the hot oil, only cook about three or four at a time.  After about two minutes in the hot oil turn the doughnuts over, continue cooking for another sixty seconds until golden brown.  Remove from oil and place on a baker’s rack.  Allow doughnuts to cool for only a minute or so before dipping in the glaze.  Enjoy!

Note: Doughnut cutters come in many sizes.  Sometimes I use a small biscuit or cookie cutter, other times I use a traditional round cutter so the amount of doughnuts will vary on the size of your cutter. 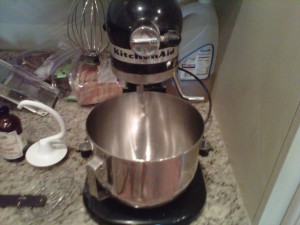 This is a stand mixer. Kitchen-Aid paid me one million dollars to use this photo 😉 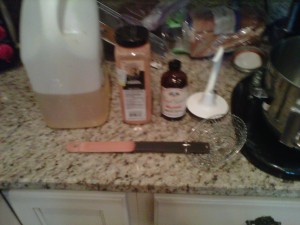 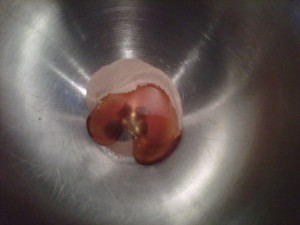 Start with yeast and sugar in the bowl of the mixer. I've used honey instead of granulated sugar. The recipe calls for warm milk to be added yet I like to substitute and play around so instead of milk I'm going to try coffee. 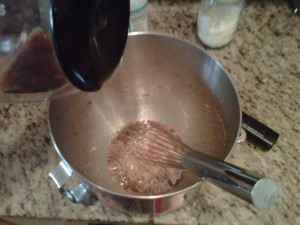 This is room temperature coffee. Two things in excess will kill your yeast, heat and salt. So your liquid should be no more than 100 degrees. Once you do this whisk it all together. 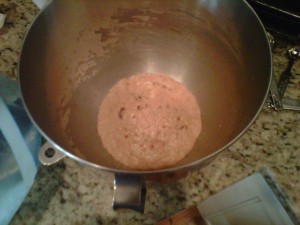 I whisked everything together and twenty minutes later I had a frothy top on my liquid. The yeast is eating the sugar and expelling carbon dioxide which forms this crust. If after thirty minutes you have nothing (no bubbles, no crusty top, no sign of yeasty activity) then THROW IT OUT and start over. The yeast could be old or perhaps your liquid was too hot and you killed the yeast, if so shame on you! I warned you, room temperature liquid OK? 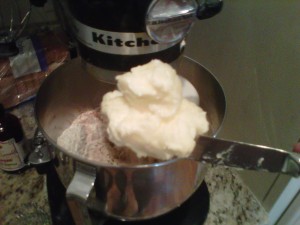 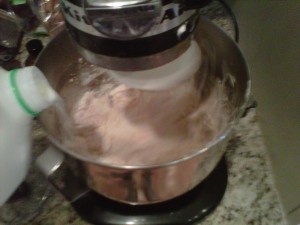 Turn on the mixer, use its lowest speed setting and I've added a splash of buttermilk. For this batch I passed on the vanilla beans because I didn't have any, or maybe we did and I didn't know where to look Now let the dough mix, lowest setting OK? 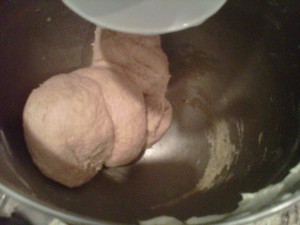 After a couple of minutes the dough should form a smooth ball that clings to the dough hook, if it's runny or shaggy then add a pinch of flour until it looks like this. 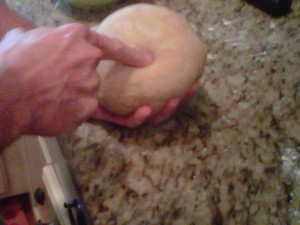 Remove the dough from the mixer. If you can poke your finger into the dough without it sticking to you, you're set. It should have the consistency of Silly Putty, Play-Doh or Green Slime. Basically if it feels like any number of blobby toys from the 70's then it's good to go. If you grew up with electronic toys then you're on your own.Now cover it with plastic wrap and put it in the refrigerator until tomorrow morning. Then go to the store and buy some oil (corn or soy) and some chocolate to make your glaze.

So this is what your dough should look like in the morning: 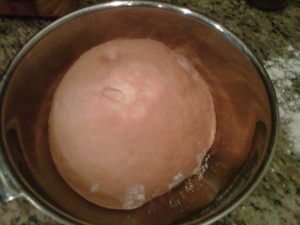 The dough has a nice dome shape to it and a small hole where some CO2 has escaped. 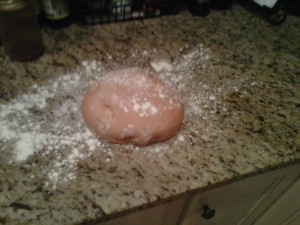 Place the dough on a lightly floured surface.Now rub your rolling pin with flour then roll the dough out. Don't squish it, gently work the dough to less than a half inch in thickness. 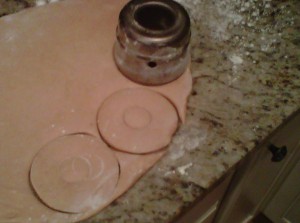 This is my antique doughnut cutter, see that little airhole on the side, it allows air to escape as the cutter is brought down. I found this at a shop in Hendersonville, NC and whenever I use it I wonder how many smiles this simple tool has created. 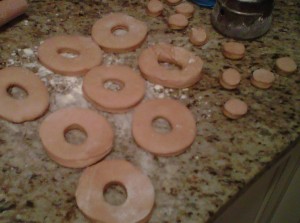 Now that I've cut the doughnuts I'll let them rise. They'll need another thirty minutes, just leave them on the counter while you make your glazes and heat the oil. 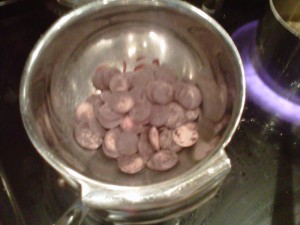 Here's some chocolate buttons that have started to bloom. It's time to use them up. I just put these in a clean, dry bowl and set the bowl over simmering water. 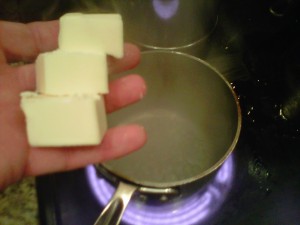 I also made a buttermilk glaze for my friend Janice. I have about two tablespoons of boiling water and a half stick of butter (NO you cannot substitute margarine!). Toss the butter into the water and whisk. You may also try apple juice, orange juice, heavy cream or coffee instead of the water. 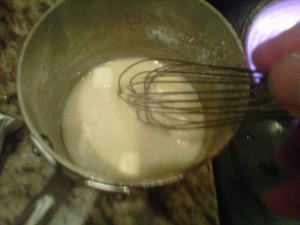 Turn off the heat and whisk in the butter then add about a cup of powdered sugar. At this point I also added a few tablespoons of buttermilk and a shot of vanilla extract. 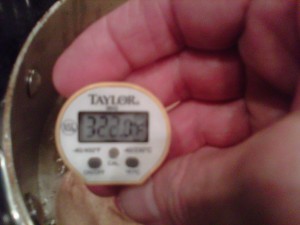 You want the oil to be in the 310 to 325 range. Anything over 325 and the sugar in the dough may burn before the dough actually cooks, leaving you with a dark, crispy yet sticky-on-the-inside doughnut. Place two or three of them in the oil at a time. Fry for two minutes, carefully flip then fry for about another ninety seconds. 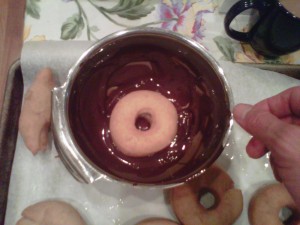 Place the doughnuts on a baker's rack or a sheet of parchment, give them a minute to cool then dip in the melted chocolate. 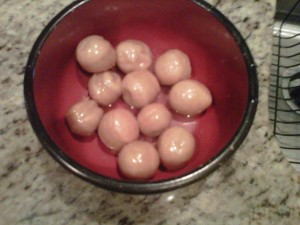 Don’t forget to fry up the holes, these little guys will cook pretty quickly. I tossed these in the glaze, just for Janice! 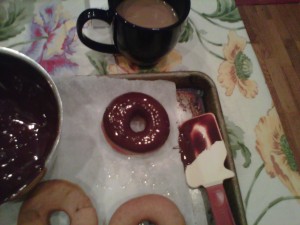 A steaming cup of coffee and a handmade chocolate covered doughnut. Long sigh. I took a plate of these to my neighbors T & E. E (the wife) has just finished a round of chemo and it looks like she’s going to be fine. Those two doughnuts really brought a smile to her face. I believe that when we depart this life, we will be judged by how we treated others and not on how others treated us. So I always try to have a little something extra to share. Happy National Doughnut Day! 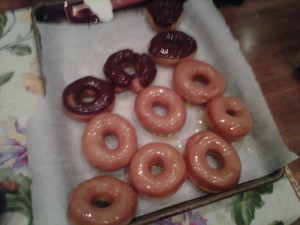