11 May Doughnuts for Chapel Hill

Months ago I convinced Marilyn Markel, the director of the cooking school at A Southern Season to host me for a demonstration class.  Amy and I decided to celebrate our 25th at the same time so we turned it into a long weekend, sans kids.  I surprised her by trading favors with a friend and he loaned us his 2006 Corvette convertible for the trip.  Furthermore, I cemented our relationship by asking Amy if she wanted to take the first round of driving duty.  “Oh, Yes!” she announced.  The Corvette was surprisingly well-mannered; when driven gently it responded gently and was very manageable around town at normal speeds.  Your grandmother (if she could get into) could drive it without a hitch.  Yet when the time came and I was able to tap into that horsepower did it ever come alive.  More on that later. 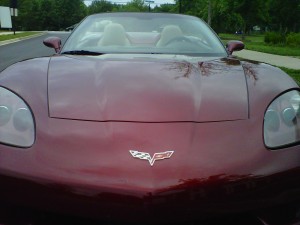 Who needs music when you have a ported and polished 500 horsepower V8?

Southern Season is only the Greatest grocery store this side of the Mississippi and I would say that it’s only competitor for the title of Greatest would be Draeger’s in San Mateo, CA.  It’s a tough call.  I’ve eaten in both restaurants, hosted cooking classes at both venues and shopped both sets of aisles.  I love both of them but each is unique in its own way.  Feel free to cast your vote through a comment.  Amy and I stayed at The Siena Hotel, maybe a half-mile away from Southern Season.  The Siena was wonderful.  A boutique hotel, incredibly comfortable, very accomodating and the service was top notch.  After checking out of the Siena we both agreed that our stay was more memorable than our visit to the Ritz-Carlton in Buckhead.  Whenever any staff member caught your eye, they immediately smiled.  And they meant it.  This is such a big deal and I can’t tell you how many retail businesses (restaurants, bars, gift shops, kitchen stores, you name it) I’ve walked into that cannot get this down.   The staff at Southern Season was equally as engaging, from the cooking school staff to Dillon at the cheese counter who happily allowed us to sample several of the many local cheeses.  If there were wine samples at the cheese counter, Amy & I would still be there. 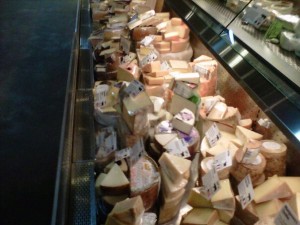 and they have a LOT of cheese at Southern Season

We had dinner at An in Cary, NC.  Steven D. Greene is the Executive Chef and he is one hell of a cook.  Steven was out of town for a friend’s wedding so for that night kitchen duties fel to Josh Hughes, An’s Executive Sous Chef and over the course of two hours Josh sent us one amazing dish after another while the sommelier paired interesting wines from across the globe.  Since Amy was driving home, her wine consumption was limited to very small tastes. 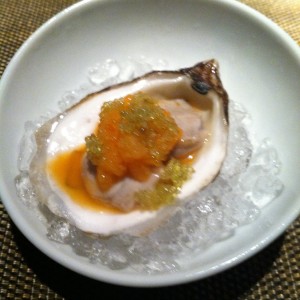 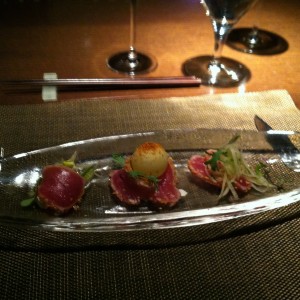 Tuna in three preparations. The white sphere in the middle is unsweetened white chocolate filled with dashi and white soy broth 😉 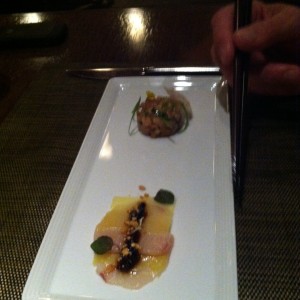 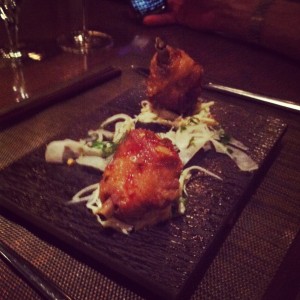 Chicken Wings! These were prepared confit style, crispy fried then tossed in a spicy Asian style galze and served over napa and fennel slaw. Served with a Gewurztraminer-Reisling blend, this may have been my favorite course. A very rousing and satisfying interpretation of standard bar food. 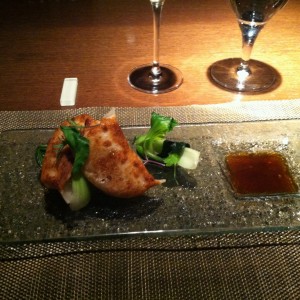 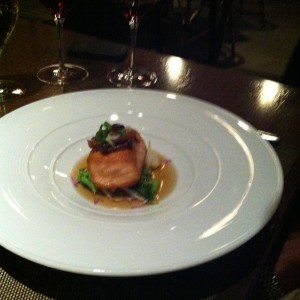 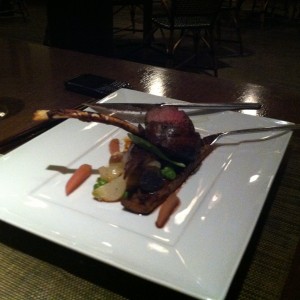 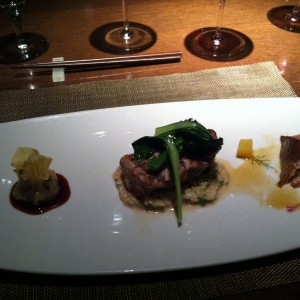 At this point we were served an intermezzo of sparkling sorbet, served on a tiny tasting spoon, one beet and the other dashi 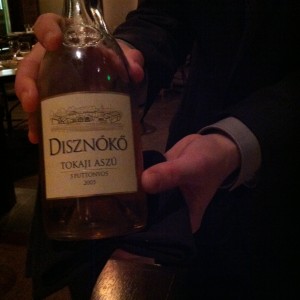 Why yes, I would love a glass 😉 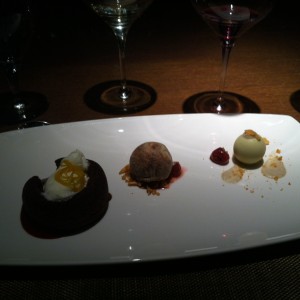 Chocolate three ways, a warm miniature chocolate cake with candied kumquat , dark chocolate ice cream, white chocolate orb filled with raspberry coulis...Quite a memorable meal and I have to say it was up there with some of the best meals I've had, including the tasting that we had at TRU in Chicago and Gramercy Tavern. 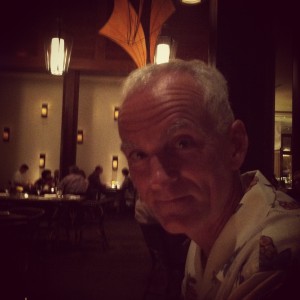 Saturday morning I got up a bit early and wrote this essay on my first day of culinary school which was also the first time I saw my wife. When Amy woke we shared coffee and buttery pastries then hit the Chapel Hill and Carrboro Farmer’s markets. 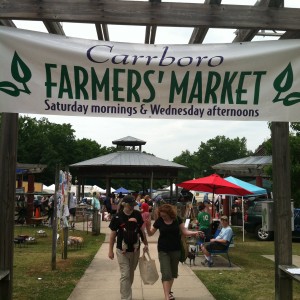 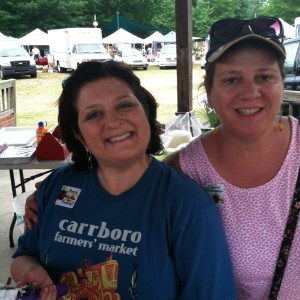 At Carrboro we promptly ran into our friend Sheri Castle, she was preparing goodies out of her "The New Southern Garden Cookbook"

You can (You Will!) buy Sheri’s book here 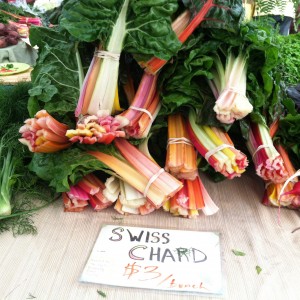 There was no shortage of beautiful sights 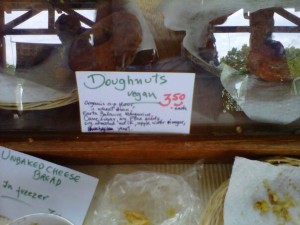 There was a lot to like at the Carrboro market yet I was mystified by this vegan Doughnut. I wasn't about to pay five cents much less $3.50 for this, the seller allowed me a taste. There's an awful lot of WRONG going on here. Of course you can guess by the list of ingredients that this was one awful doughnut, not to mention the misguided idea that one can eat a doughnut and receive health benefits from it. Come on...wheat bran, flax seed and ground almond...in a Doughnut? So what if it's vegan? It was a doughnut with an exorbitant price tag, little health benefit (you’d have to eat a lot of these to get your dose of fiber) and certainly not one shred of guilty pleasure. The small sample I had was as appealing as a stale Cliff bar…that had been stepped on by a horse. A lose/lose all the way around. 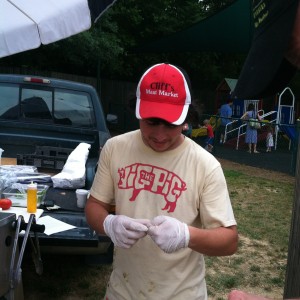 Yet just down the way was a guy selling handmade hot dogs, served on his own sourdough bun, his own mustard and sauerkraut. Now this is a guilty pleasure and it was damn enjoyable. His restaurant is The Pig and we understand their BBQ is first rate. 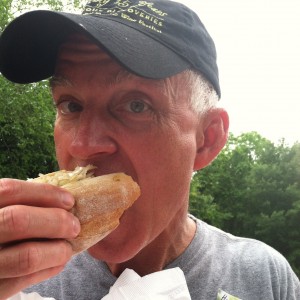 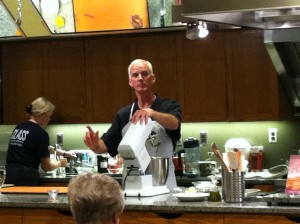 Eventually I had to go to work. We had a good turnout for the demonstration class, even though we were competing with the Kentucky Derby. 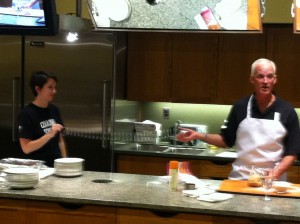 This is Gwen helping me demonstrate what happens when gluten (wheat protein) gets kneaded and unscrambles, much like an egg white that gets overcooked. We're stretching a slinky until it's taut. Proper manipulation of protein gives us delicate cakes and pastries (such as doughnuts) or crusty breads such as a baguette. As the dough is allowed to rest, the protein chain relaxes. Gwen is walking towards me to allow the slinky (protein chain) to "relax." That's why we don't knead or over-mix cake batter 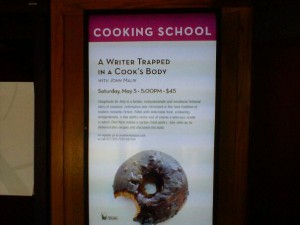 So I totally forgot to take a photo of the doughnuts I made. We made a cinnamon and vanilla batter, dipped them in melted dark chocolate then into a variety of whimsical toppings including brightly colored, candy-covered sunflower seeds, tiny candy pink and white hearts, shaved dark and white chocolate. Sorry but you'll have to settle for this electronic billboard advertising my class. 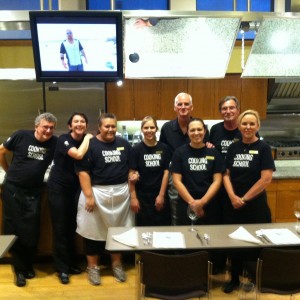 The staff at Southern Season is top-notch, helpful, professional and polished.

I would love to return to Southern Season yet I have given myself a goal. I'll come back when S/S considers me for their wall of signed portraits, much like this portrait of the talented, lovely cookbook author Rebecca Lang. That means I need to be published, not self-published.

After a very leisurely Sunday morning we had to head back to Greenville.  We took I-40 to Hickory then made our way through the mountains via US 70, taking a few detours through some twisty roads.  We stopped and had ice cream at this neat, old-school soda shop, Myra’s.  This is in Valdese, NC. 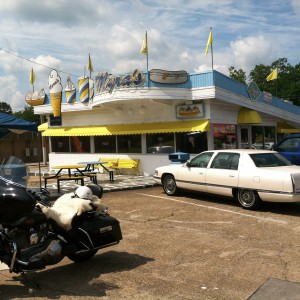 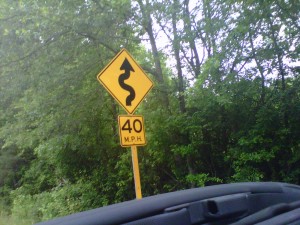 Top down, sunny day, eyes up and focused...time to drive. On roads such as this one the Corvette shined. I used the steering wheel mounted paddle shifters, turned off the traction control then got to work. Corvettes have a Heads-Up display, a hologram that is broadcast onto the windshield that gives speed, RPM's, coolant temperature and a G meter. Somewhere on NC 129 I saw .60 of a G and it was at that point Amy asked me to settle down. "Yes ma'am." All in all it was one of the better trips that Amy and I have enjoyed. Memorable food, plenty of time together, a great experience at Southern Season and plenty of time together. Here's to a happy marriage. Cheers!