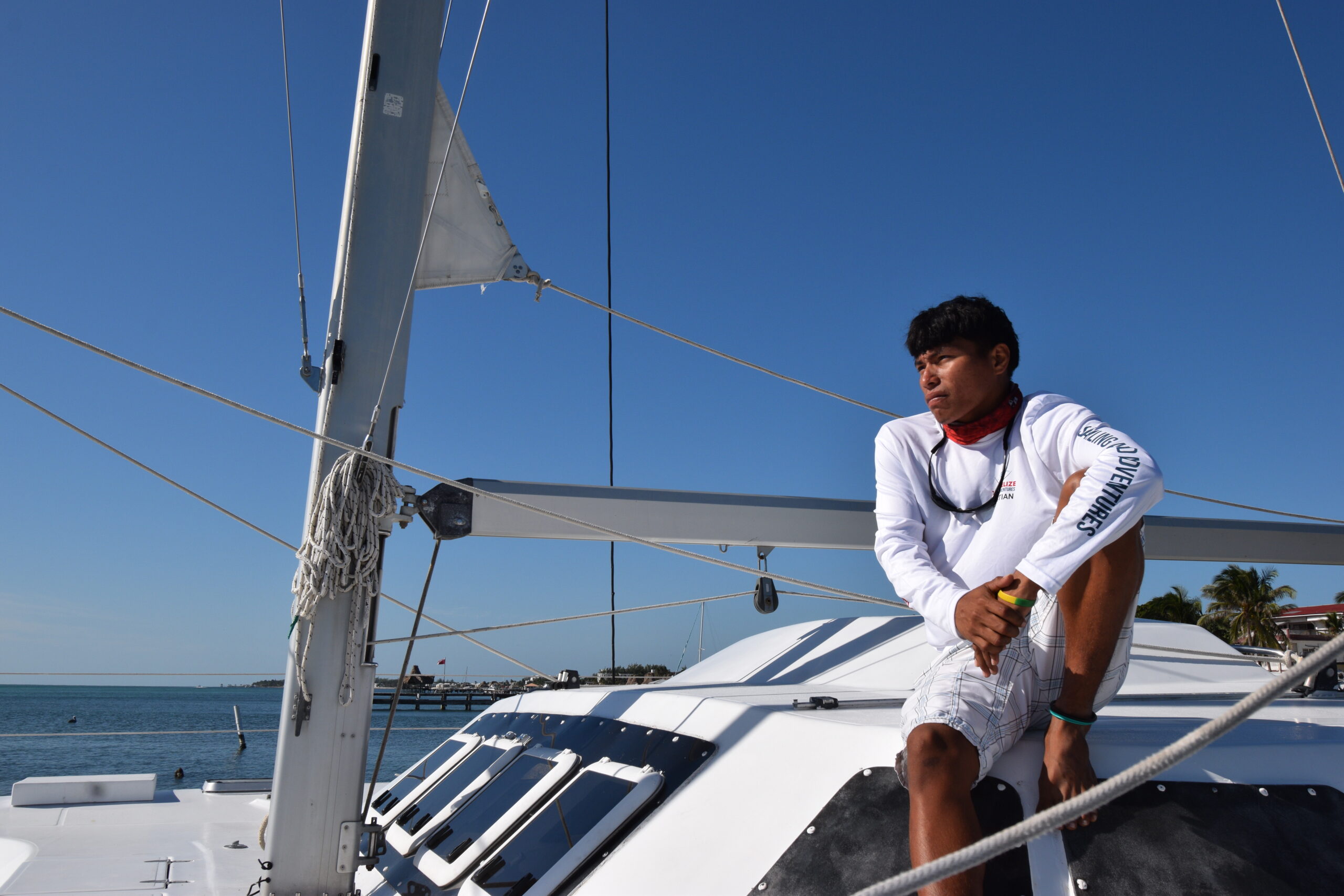 “I was nine years old and the air tank on my back was as tall as I was. I remember how beautiful the water was that day and it was just me and my uncle on his boat, out by the reef. He adjusted my mask and asked me if I could breathe. I took a pull of oxygen through the regulator and nodded yes. Then he picked me up and dropped me over the side.”

When Christian was eight, he was snorkeling almost daily. At nine he was learning to scuba dive, at ten he was selling small tropical fish to local dive shops to stock their aquariums. And at 21, he is captain of Miss Faith, the catamaran on which we enjoyed our first sailing excursion in Belize. I’m no sailor yet I can recognize confidence and ability and Christian has it in spades. Our time on Miss Faith was smooth and memorable and watching him bring the big catamaran into the dock while also sharing his knowledge to a less experienced sailor begged the question, “Who is this young man?”
And about five weeks later I sat with him on Miss Faith and we shared similar stories of our youth. Christian is a native to Ambergris Caye. As a little boy growing up on a small island, he naturally spent a lot of time in the water. A lot of it was due to his home life.

“What little kid wants to be around Mom and Dad when they’re fighting?”

Christian is Mestizo and Mayan, his Dad hails from Cayo District, western Belize, the ancestral homeland of the Mayan culture and home to the largest ancient pyramid in this hemisphere, El Castillo. His dad missed out on higher education; while his brothers were in school, he went to work selling bread to help the family get by. As a kid, his dad fell in love with the water and later shared that love with Christian. And as Christian grew, so did his abilities in the water. He remembers being very young, five or six a running to the water, away from the conflict at home, and swimming for hours. Learning to swim led to learning to snorkel then learning to scuba dive. The landlubber in me guesses that’s a normal progression for an island kid but it’s not so. Lots of local kids can’t get over their fear of the water.

“Captain Shark’s, a local dive shop, would pay me a couple dollars for those bright tropical fish and I could make ten dollars in a short afternoon. Soon I was building my own traps from those gallon jugs, cutting them in half and baiting them. We were very poor and there was no such thing as money for snacks or extras, and of course I was always hungry.”

We both agree that’s good money for a ten-year old and snacks were no longer an issue. His pre-teen youth was full of the same games, the same adventures I had as a little kid, his happened to be on water. Sitting on the top of Miss Faith he points north. “We used to play tag, but in the water. And like that dock over there was home and right here was the other side. So, all that was our playground.

I’m surveying his playground and shake my head.
“Christian, that’s like a quarter mile, one-way.” When I guess as to the enormous amount of swimming he would’ve done one ordinary afternoon, he just grins and agrees.

Christian is lean and athletic, with those natural, seamless reflexes only a 21 year-old possesses. He climbs easily across the bobbing boat of his company fleet as he scrambles to retrieve my dropped pen. Looking out at the sea, he slips his own moorings and sails off to his youth.

“We didn’t have phones or TVs, no video games but we had some good times. There was, I don’t know ten or twelve of us and after school we’d just meet up. We just knew where to meet. And we run down to the water and play and swim for hours. I miss those days. Such good times. When I was a kid, we always had something to do, and we never thought about what was for supper. I started fishing when I was little. No rods or reels, we just used a spoke from a bicycle wheel and tied a line to it. And we’d go down to the harbor, by the sea wall and corral the mullet into a small area, and we’d gig them with that spoke. Then off we’d go with our catch to a friend’s house and their mom would make empanadas or fish chowder. I spent a lot of time with my grandfather back then and one of his favorite sayings was ‘Good things happen to good people and those that are patient.’ Back then we looked out for each other, it was me and my friends and if one of us was in trouble, we would help each other however we could. And I feel like all that has come back to me now”
Christian’s sails are now full of a youthful breeze.
“One time me and two friends went snorkeling to the reef, we were at a point where one side of the reef the water is maybe eight feet deep, the other side the water is like twenty-five feet deep. And I’m on that side, my friends are on the shallow side. And this Eagle Ray comes rocketing towards me, so fast. And I knew something was chasing that ray. Then this big Bull Shark comes racing towards me, he’s like eight, nine feet long. Such a big shark. And I just froze, that shark flew past me after the ray. I surfaced and told my friends to get in the boat. And they said why. Just GET IN THE BOAT!”
“Did they get in the boat?”
We share a laugh then trade stories of my south Louisiana childhood, of snakes and crayfish, alligators and giant fish with an alligator’s mouth. Yet somehow the ferocious animals of my youth don’t feel as threatening as Bull Sharks and decompression sickness.

“When I was getting my diving certificate, I’m in the water with four other students and our dive master, my first organized dive, and we swim past the coral and this big green eel rushes at me and bites my tank. I heard this ‘Clang!’ and saw this eel swimming away.”
Yeah that never happened to me in Louisiana.

“When I was swimming with my friends, sometimes I’d see a boat, a sailboat, heading out to the horizon and I’d dream of doing that one day. Then Dad drifted away from us and I lost interest in school, but I never lost interest in the water or sailing. It was Andy Miller, he helped me turn my dream into reality. The school offered a spot on the sailing team to the ten kids with the best grades and that’s when I buckled down. And in a few months, I was on the team, learning how to sail.”
At those words his smile is brilliant, as that’s what led him to Tammy Lemus. Tammy, an expat with a mile-wide entrepreneurial streak, was the “Mom” for the sailing team. Soon she was Christian’s surrogate mom when he ran from the rancor at his own home.

“Tammy treated me like her own son, she taught me to be hard, to be tough when the time came. And she promised me one day I’d be captain of one of her boats. At the time she had one small single hull sailboat.”

That boat is still part of Tammy and Nef’s (Neftali) fleet, looking a little forlorn and destined for some updates as soon as vacationers return to this island.
“Tammy was dating Nef and he was a really good guy, they were always planning for the future. Nef liked me right away and I was just a kid, thirteen, fourteen. And he had a good heart, an open mind. I started working for them and I just kept my eyes open, I’d do whatever needed to be done. And I was gaining more knowledge of the sea. And before I knew it I was on my first paying cruise. We sailed to Caye Caulker and took them snorkeling at Hol Chan and they were so happy. When you snorkel or dive at Hol Chan it’s like a 3D aquarium and that time, I hadn’t been in years and it all felt new and wonderful to me, and my guests. That was years ago, and I remember that trip well. It was a beautiful day, and the guests were smiling and thrilled with everything. At the end of the trip, I got a really big tip, too.”
“That’s cool, right?”
“Yes but I never expect a tip. I just do my best and if it happens, that’s great. Visitors, guests, they want to feel that positive vibe, so we treat them like family. Grandpa used to say, ‘When we treat people well, we receive that energy back. That was one of his sayings and he’d remind me of that often. So that’s how I treat our guests, our visitors, the crew. And on the water, there’s always something new to see, there’s dolphins that come up to the boat, schools of flying fish, sea turtles. It’s always an adventure and that’s what I love about this job.”

A captain of a sailing ship at 21 and an important part of the number one industry in this country, what’s next for him?
“I’m studying mechanics. We have six boats now and when one of our engines goes down, Nef has to pay a mechanic and I’d like to keep that money in the company.”
At that I remind him of his grandfather’s saying: “When we treat people well, we receive that energy back.”
There’s a cleansing aspect to the water. Perhaps if we spend enough time in it, let it run across our bodies, course through our veins, will it absolve our past of its sins and mistakes, polish our frayed edges, restore our souls? I see that theme in the marketing for the four-star resorts coming to this small island. Lithe models in yoga poses, beautiful girls in three hundred-dollar bikinis apparently need their souls cleansed, too. My cynical side often smirks at those advertisements because they focus on the individual, not the culture, country or experience. Christian sees these new resorts as an opportunity to show off his boyhood playground, his sailing skills, his country, his water, his home.

You’re reading the year-long adventures of John & Amy Malik in Belize, Central America. We’re professional chefs, restaurant owners, food & travel writers, adventurers, experienced tent campers, and hikers. We prefer authentic street food over a steakhouse, craft beer over traditional lager, a glass of Spanish Garnacha over California Merlot. Should you feel so inclined, please share this essay with someone you’d take on a rustic adventure, and sign up for our next dispatch from Belize. Just click here.