Posted at 21:59h in Cool Machines by ChefJohn 0 Comments
Share

“It’s like spreading frosting on a cake then, right?”  I heard myself thinking.  I’m standing in the middle of I385 on a chilly, grey day as Mike Haynes, the operator of this enormous Guntert & Zimmerman S-850 describes how critical the mix of the concrete is to the finished product, which in this case is not a birthday cake but a six-lane Interstate Highway.  I catch myself and decide to keep that frosting analogy to myself.  “If the concrete is too loose it won’t keep its shape, too dry and it gets real difficult to make a smooth road.”  I nod my head knowingly.  I’m not that great of a baker but I can be if I’m free of distractions.   Mike has an enormous amount of distractions.  His work space is in the middle of the interstate and he seems like a guy that enjoys his job and its myriad of distractions.  His job is to make sure that we don’t even notice what $65 million gets you.  I grew up in south Louisiana and we loved to complain about the roads and how bumpy and fluid most of them were.  Charleston was the same way.  Even the best roads could make you feel as if you were in storm tossed sailboat.  Actually I’ve been in a storm tossed sail boat and I really enjoyed it, it was a hell of a lot more exciting than a drive down the floating, nausea inducing asphalt of Airline Highway between New Orleans and Baton Rouge.  Pat McKenzie, the Resident Construction Engineer for this project politely informed me on the drive over that the Interstate Highway System is our only engineered highway.  Every other highway is just a repave of a repave of a paving over what was once a dirt road with each repaving a bit more sophisticated.  So how does this massive piece of equipment that looks as if it would fit right into a Transformers movie actually turn just right concrete into a smooth road surface? 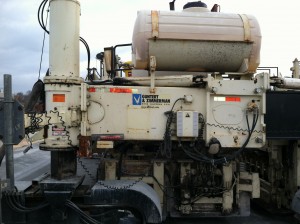 The dump truck unloads in front of the G-Z S850 as it makes its way forward at 4 to 6 foot per minute.  Now this is not ordinary concrete.  The stuff is actually made right off Butler Road and tested daily by DOT Engineers.  It’s transported to the area that is being paved and unloaded in front of the G-Z.  At that point the G-Z runs over the concrete, smoothing it out first with a gear-driven plow that moves side to side.  Here’s foreman Jack Lansdown at the plow: 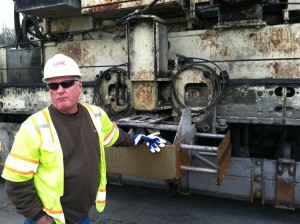 The plow spreads the concrete back and forth, and as the G-Z travels over the concrete via four independently actuated tracks, a series of hydraulic-actuated plates disperses the concrete (like spreading frosting).  These plates basically tamp the concrete down, vibrating at a pre-determined rate (too hard and the aggregate in the concrete will settle, sort of like when your blueberries all end up at the bottom of your muffins.)  As the G-Z moves forward a chain driven unit, the dowel bar inserter or DBI inserts steel reinforcing bars that help ensure a smooth curing process and eliminates waves and dips in the highway.  The dowel bars are 24 inches long and run parallel to the flow of traffic.  Interstates are made in 15 foot spans; there has to be some allowance for movement otherwise the temperature extremes and traffic loads would have our highways snapping like a dry matchstick.  Here’s the DBI: 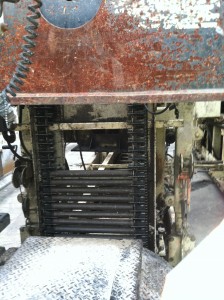 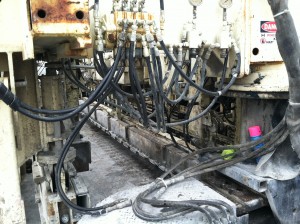 As the G-Z passes over the tamped concrete it measures and records the distance travelled and the thickness of the finished product.  Our widened 385 is getting a 13 inch layer of concrete on top of two inches of asphalt, a six inch aggregate base and six inches of a cement modified sub-base.  Pat McKenzie explained to me that highways are not engineered for cars, they’re really built for trucks.  The typical semi tractor-trailer travelling down the interstate puts as much pressure on the highway as 3,000 cars do. The G-Z has a 100 gallon hydraulic fluid reservoir and a massive amount of hoses and gauges. 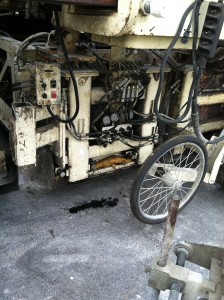 As the G-Z continues on its path the concrete is smoothed out a final time.  After the concrete cures it is diamond ground and the final result will be as smooth as the interstate where I385 meets I26. 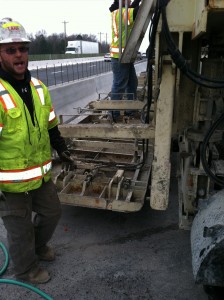 Mike Haynes and the the concrete spatula

When this project is finished and your drive down 385 between Roper Mountain Road and Fountain Inn is smooth sailing, you can thank Mike Haynes, out here in the middle of a buzzing interstate, making certain that the concrete that provides the finishing touch on your Interstate Highway is as smooth as a well-frosted cake made by yours truly. 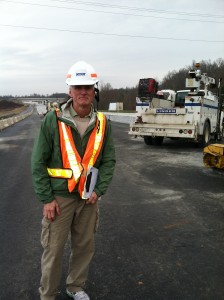