14 Oct Get Back on That Horse!

“Goodnight John.  Goodnight Tommy.  Oh, and in the morning, before you get out of bed make sure you shake out your shoes real hard before you put them on, just in case a scorpion crawled in during the night.  And if one does comes out, squash it with your shoe.  I love you.” And with that she kissed us good night.  I was probably eight yet I was already used to my mom’s advice.  So instead of lying awake and nervously listening for the scuttle of Mexican scorpions on the tile floor, Tommy and I slept knowing that morning held the possibility of dueling with a deadly foe.  Life with Virginia Baylor Malik was never dull.

The daughter of professional cattle ranchers, she was thrown from her first horse at the age of five and quickly admonished to “get back on that horse” by her robust dad, Thomas Baylor.  She grew up in the Southwest of Texas and central Mexico as her dad sought out greater opportunity which came via the Ojo, an enormous ranch in central Durango.  To hear her tell it, Durango, Mexico in the 40’s was akin to Dodge City of the 1870’s.  There were bandits and heroes, vampire bats and scorpions, horse thieves and caballeros, Catholic priests and ancient Spanish ghosts.  Hollywood loved Durango and many classic Westerns (True Grit, The Magnificent Seven, The Wild Bunch, Sons of Katie Elder) were filmed in its rugged countryside.  John Wayne, while filming The Sons of Katie Elder, asked for an audience with my Granddaddy Thomas Baylor at the Ojo.  Perhaps to further his craft, John Wayne wanted to spend time with a true cowboy.  We were told that Granddaddy gave Mr. Wayne a tour of the Ojo yet was unimpressed with the actor’s quick-draw of a Colt revolver.  While on the Ojo, the Baylor family grew vegetables and mangoes, shot deer and antelope, milked cows and made their own tortillas, bread and butter. And when it was time for her to find her own way in life, she went to nursing school in San Antonio then at the invitation of another nurse, took a train to New Orleans and Hotel Dieu hospital where she soon fell in love with a young law student, Tom Malik. 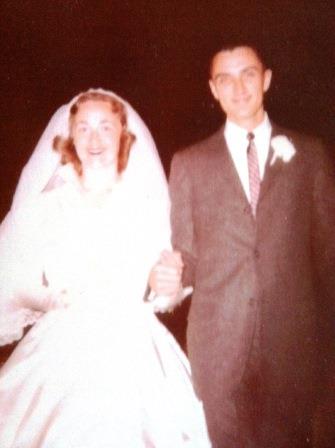 And she was beautiful, too.

Life in south Louisiana was often too safe for her.  Our venomous wildlife tended to keep to itself, unlike the wildlife of central Mexico that was constantly trying to slither into your home.  Alligators and water moccasins weren’t nearly as exciting as rattlesnakes, tarantulas and scorpions.  My tales of face to face encounters with armadillos or raccoons were often trumped with her stories of gunfights, rodeos and petty revolutionaries. And she never quite accepted Creole food over her favorite Mexican dishes.  In our town, her cooking skills were an anomaly.  For the bulk of my childhood, “Miss Virginia’s House” was the only Mexican restaurant in LaPlace, Louisiana. My friends, sons and daughters of Cajun and Creole descent, were fascinated by my mother’s cuisine and I was the one that gravitated to her kitchen.  She favored enchiladas and pollo en mole’ over crayfish etouffee or chicken gumbo and my friends considered her food incredibly exotic.  With her own hands she taught me the difference between crepes and pancakes, biscuits and scones, jam and jelly.  We cleaned freshly harvested ducks, redfish and frog legs and it wasn’t unusual for her to drive across town just for tomatoes, onions or the right sausage.

My mother could be incredibly compassionate.  A surgical nurse in a busy New Orleans hospital, it wasn’t unusual to see her cry when a patient passed away yet if I ran to her with anything less than a subdural hematoma her prescription was usually a kiss. “You’ll be fine, just wash it with a little soap and water.”

My mother taught me many things but most of all she taught me resilience. By the time I was probably five my appeals for something to drink were answered with “If you’re thirsty then suck on a button.” In other words, I was quite capable of getting my own ice water so I should go to it.  And when I failed at something, she offered a standing invitation to “get back on that horse.”  And she loved a good practical joke.  Perhaps her sense of humor stemmed from being born on Halloween.  She certainly relished that holiday.  One Halloween, when my brother and I were too “mature” to trick or treat, we decided to hand out dry dog food kibble dipped in orange icing, Halloween candy at its best!  When my mother discovered us creating this treat (I’m sure one of my sisters ratted us out) her fury quickly turned to raucous laughter yet she insisted we throw away the candy lest we end up on the front page of our little newspaper on All Saint’s Day.

Her zest for adventure was never quite satisfied by suburban life or our family vacations to Washington, DC or Orlando, FL.  She yearned to move back to west Texas or central Mexico, live on a big ranch, commute on a horse and carry a gun.  Yet she was faithful and loving to her husband, to the point of tenderly caring for him and his failing heart during his final years.

She taught me how to throw an ax, tell a story, sharpen a knife, identify poison ivy, filet a fish, offer a hand, poach an egg, wear a suit, pick out a ripe tomato, make a fist, stand up to a bully, and most importantly, to pray on my knees.  Goodbye Mom.  I love you.