On first glance Jessica Kristie’s debut novel has a distinct Dickens’ like narrative: Kidnapped pre-teenage children living out a meager existence as slave labor of a shadowy manufacturing complex far removed from the caring eyes of civilized society. The child-laborers are coerced through beatings, rape, intimidation and starvation and should one falter then that child may disappear from the manufacturer’s roster, never to be heard from again.  Sadly, Barbed Wire Butterflies takes place not in Victorian era England but in modern day west Texas.

Ridiculous, correct?  Slavery has been illegal in the US since December of 1865 when the 13th amendment to our constitution became official.  Two years earlier when Lincoln issued his Emancipation Proclamation there was approximately four million slaves in this country.  Yet almost 150 years later slavery, forced labor and indentured servitude still exists, even in this country.  Human Trafficking.org estimates that as many as 16,000 people a year enter this country as illegal human traffic and are bound to forced labor or sexual exploitation.   A horrible condition once thought to be the domain of the third world still exists in the most prosperous country on earth and Jessica Kristie would like you to take a good look at it, through the eyes of a terrified thirteen year-old girl.

Elani Benjamin lives every parent’s worst nightmare.  On her way home from school she stops at a convenience store in her Sacramento neighborhood and wakes up a few days later in the trunk of a car just before she’s dumped into what appears to her as a prison for juvenile delinquents.  A stern woman relays this news.  “This is you girl, L17.  You’re locked in at all times.  We can’t have you girls trying to run about now.  Just keep your head straight and do what you’re told.  You got that girl?”  And with that Elani is ushered into her new life as slave labor in a gritty warehouse known as The Hub.  She’s given some jumpsuits, directions to a sparse bathroom, access to a tainted water fountain and roughly five hundred calories a day.  Elani and her companions spend twelve to fourteen hours a day assembling among other things, cell phones and clothing in stifling conditions with no hope of escape.  After a few frightful days, Elani makes up her mind that she’s not going to let the misery of The Hub take her spirit and eventually sets into motion a plan to regain her freedom.

Barbed Wire Butterflies is frightening and disturbing.  Mrs. Kristie invites us inside this seething, stifling warehouse and drops us next to Elani as she picks at the dirt crusted on her thin body, sips her thin soup and stale bread, and cries herself to sleep wondering who will look after her little brother.  At one point I pondered an alternative narrative:  As one of the guards eyes Elani lasciviously, Navy SEALS fast-roped into The Hub, efficiently taking out the guards with well-placed shots as they scream “Get down on the floor!” in English and Spanish.

Mrs. Kristie however, relies on the fortitude of this emaciated little girl (who fashions a butterfly out of a rusty piece of wire to remind her of the life she had outside) to determine the outcome.  Barbed Wire Butterflies is a gritty tale of a most unlikely heroine and her struggle against greed, corruption and indifference.

Mrs. Kristie has partnered with Courage Worldwide and is donating 100% of her print royalties from the sale of Barbed Wire Butterflies to this international organization dedicated to providing a safe haven for children rescued from sex-trade traffickers.

Barbed Wire Butterflies will be available on Amazon and better bookstores through Winter Goose Publishing in January of 2013. 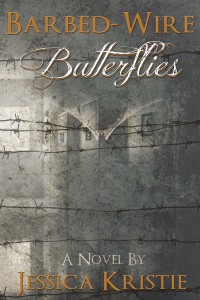