The bedside pump softly gurgles as it pushes oxygen through fresh water.  White noise, it’s rain softly falling on a tin roof or the gentle whoosh of seawater on a sandy shore.  Just the accompaniment for a dying man.  Phil draws a breath through the clear tube and reaches to his nose, adjusts the tubes then turns to me and smiles.  His fingers vibrate unsteadily and he occasionally misplaces words but that’s understandable for a man that has morphine every three hours.

“Phil, are you scared of dying?”

Phil is 82 and in the final stage of his life.  Several months ago his doctor gave him just a few months to live.  By my guess he weighs about 85 pounds and his once thick, unruly hair has thinned considerably.  The spoon in his hand shakes, rattling the inside of the coffee cup as he enjoys a few ounces of chicken noodle soup that I’ve brought him.  He turns to me and smiles “this is the best soup I’ve had in a long while.”  His eyes and mind are still sharp as ever.

“Scared?  No, but I’m not happy about it.  I am content though, I’m content.  I’ve lived a great life and seen some amazing sights.”

Rannie, the second love of his life, reaches for his hand.  I’ve known Rannie for many years.  I first met her at Christ Church where I volunteered as a chalice bearer and reader.  Rannie is one of the happiest people I’ve ever met.  Perhaps she’s in her mid-70’s, she has two grown children and is a widow.  She lost her husband to cancer and a son to a heart attack yet I never see her without a smile.  A few years ago we were both serving at the same service and as we were lining up in the back of the church she grabbed my arm and pulled me close.

“John my darling, I just heard the most delicious rumor.  Are you going to be my chef?”

I tried to feign ignorance but her eyes were sparkling and she was grinning like a school girl that had just been invited to her first prom.  I winked and her reaction earned her a scowl from our rector.  The processional music had started.  She grabbed me then kissed me, leaving a pink tattoo on my left cheek as Reverend Jones smiled and wagged a finger at her.  A week prior I had agreed to take the job at the retirement community where Rannie had moved only six months before.  On my second day as Rannie’s chef she stopped me in the bistro and introduced me to Phil.  They were seated at a table with another couple and were holding hands.  As we chatted I noticed Phil squeezing her hand and as he did so, Rannie’s smile broadened.  These two were so much in love that it was contagious just standing close to them.  Phil was a widower, a retired executive for Sherwin-Williams and soon became a member of my dining committee.  Every month I would get together with this group of residents and discuss what was and was not working.  One or two members of the committee used it as their personal soap-box, an opportunity to demand exactly what they desired according to their own personal schedule. Others saw it as sort of civic duty, a responsibility fulfilled and some enjoyed it for the social aspect.  Phil was the diplomat and problem solver and after a few meetings it was obvious he had been successful in business.  He would discuss issues, look at options and make practical suggestions.  And he understood my challenges all too well.  We had a lot of respect for one another and at the end of one especially challenging meeting he pulled me aside to compliment me.

And he had an interesting point.  As we age we gradually lose the ability to taste and by the time we reach 80, most of us will no longer be able to discern the many nuances of a carefully prepared dish.  Our biggest complaints centered on the temperature of the food.  Coffee cups and soup bowls were kept at 130 degrees, soup was ladled at a minimum of 180 and coffee was brewed and served at 195 yet we still would receive complaints about cold coffee or cold soup.  Didn’t matter if a soup was made from our own chicken stock, fresh carrots and onions, fresh chicken and thyme then topped with chopped parsley because a  lot of our residents wouldn’t be able to discern those subtleties so it better be scorching hot or I would hear about it.  Phil understood because he noticed things, had traveled and enjoyed himself in many parts of the world.  He also knew and understood what age was doing to him.  “Salt, sugar and heat, that’s about all most of us can taste so don’t sweat it John.  Take care of the big stuff.”

So I took care of the big stuff for almost three years and when I left Phil shook my hand and thanked me for my hard work and friendship. “Don’t be a stranger.”  He advised.  And now, a year later, I’m sitting next to him as the morphine and cancer takes its toll.  He sits up and grimaces, his skin sagging at his joints, the pain on his face evident.  Rannie knows he’s in pain yet can only offer her hand.  She’s told me that when Phil dies she’ll have a huge, inconsolable hole in her heart.

“Tom, my husband, and I used to talk about how wonderful our retirement would be and when he died, a huge part of me died with him. When you lose a spouse, you lose so much.  I hated getting into bed at night because that comforting touch is gone.  I missed having Tom’s body next to mine, listening to him breathe, feeling the rise and fall of his chest as he slept, holding his hand.  All the wonderful little things you take for granted, and then he was gone.  I was so distraught for so long and I thought I would never be in love with anyone else ever again.   And then I met Phil.  And I fell in love.” 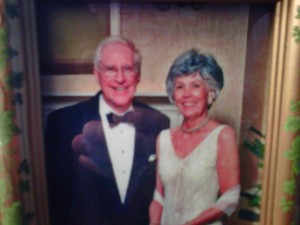